Blue Jays pile up school-record 505 yards of total offense in first half, advance to second round for fourth time in five years 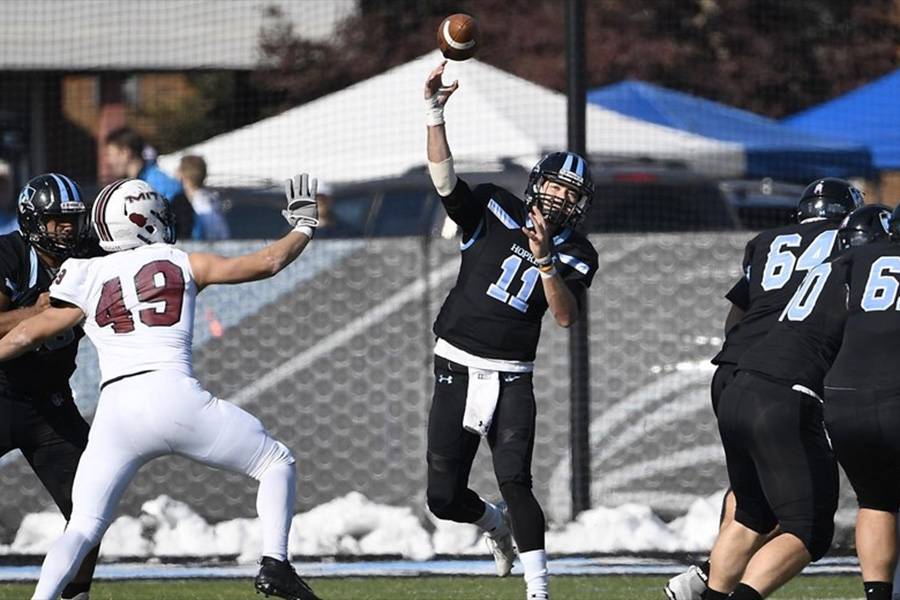 The Johns Hopkins football team raced to a 42-0 halftime lead and never looked back in a 49-0 victory against MIT in the first round of the 2018 NCAA Division III playoffs at Homewood Field on Saturday afternoon.

The No. 13 Blue Jays (10-1) scored on six of eight first-half possessions and amassed a school-record 505 yards in the opening 30 minutes of play.

With the win, Hopkins advanced to the second round of the tournament for the fourth time in five years. The Blue Jays will visit Frostburg State (10-0) on Saturday at noon. The Bobcats moved on with a 42-24 win against Western New England. Complete NCAA Division III brackt

JHU got all the offense it would need in the first quarter as junior quarterback David Tammaro connected with freshman Harrison Wellmann on a pair of touchdown passes. Wellmann opened the scoring with a 35-yard touchdown reception to polish off a five-play, 60-yard drive midway through the first period, then added his second touchdown reception, this one from 14 yards out, late in the period. Complete box score

Tammaro completed 21 of 27 passes for 321 yards and three touchdowns, and he also rushed for 48 yards and another score. Tyler Messinger paced the 280-yard ground game with six rushes for 74 yards and the one touchdown, and Ryan Hubley had a game-high eight receptions for 79 yards. JHU's 677 yards were the fourth-highest single-game total in school history.