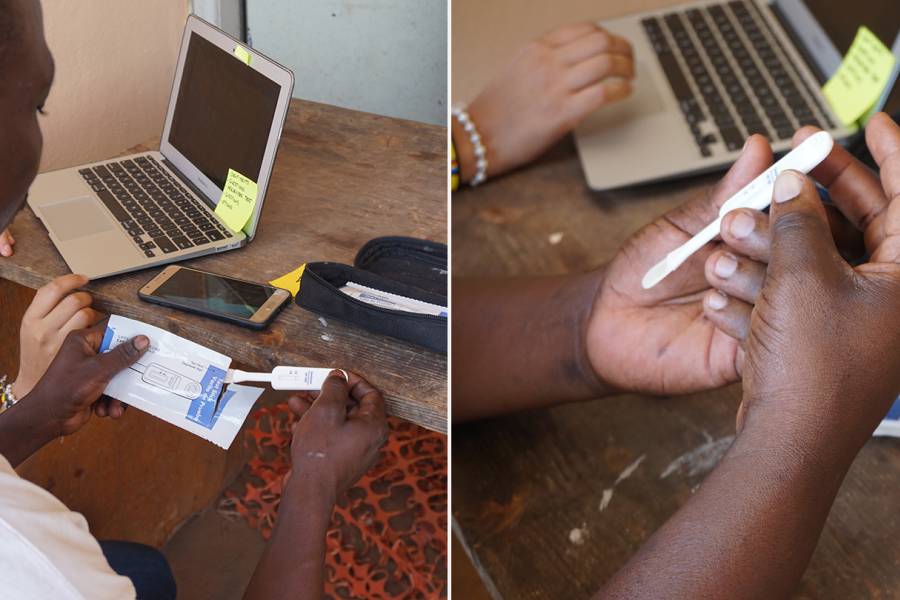 In Côte d'Ivoire, a plan to reach at-risk men for HIV testing

As part of ongoing efforts to stem the spread of HIV, the Johns Hopkins Center for Communication Programs last week began efforts to deliver 2,500 HIV self-testing kits to hard-to-reach men in Côte d'Ivoire at high risk of contracting the virus.

Men in Côte d'Ivoire—as in many nations—are significantly less likely to be tested for HIV than women. Many men fear the consequences a positive test would have on their social and economic status, far more than they are concerned about their health. Public health officials, meanwhile, encourage testing for HIV and an immediate start of treatment to reduce the risk of spreading the virus. The World Health Organization says that up to 80 percent of men in some African nations have never been tested for HIV and around the world it estimates that only 75 percent of people with HIV know their status.

With support from the U.S. President's Emergency Plan for AIDS Relief through USAID, CCP's Breakthrough ACTION project is conducting a pilot program to deliver self-testing kits to men in three regions of the West African nation of Côte d'Ivoire. Self-testing is a convenient—and, above all, private—way for men to learn of their HIV status, the first step toward treatment. Self-testing is a relatively new approach to HIV testing. Kits have been made available in several countries across southern Africa where HIV prevalence is the highest.

CCP last week began delivering 2,500 HIV self-testing kits to hard-to-reach men in Côte d'Ivoire. Self-testing is a convenient – and, above all, private – way for men to learn their HIV status. The key will be linking those who test positive to treatment. https://t.co/vCWd0VJVYU pic.twitter.com/aJX6bQdgn6

"Many men are not going into the health centers. Somehow you need to bring the test to them," says Danielle Naugle, a CCP researcher who is helping to lead the effort. "We need to make it as easy as possible for them to be tested. And we need to overcome the fear many men have of finding out whether they have HIV."

"We are creating a system that we hope will keep men from falling through the cracks," says Caitlin Loehr, a CCP program officer who is working with Naugle on the intervention. "We need to make sure that those who test positive follow up and get treatment immediately."

The self-test is quick. When using this version of the self-test, the user swabs their mouth for saliva and then puts the swab into a solution for 20 minutes. Like a home pregnancy test, one line means the test is negative and two lines means the test is likely positive.

"Many men are not going into the health centers. ... We need to make it as easy as possible for them to be tested. And we need to overcome the fear many men have of finding out whether they have HIV."
Danielle Naugle
CCP researcher

Even though HIV is not spread via saliva, the test is still very accurate as it detects antibodies produced in response to HIV infection, not the virus itself. Still, aware that some may raise questions about HIV transmission modes and the reliability of this unfamiliar saliva-based test, CCP will also be working to build trust in the new product through clear messages about the reliability of the results.

To determine the best way to design the self-testing program, Breakthrough ACTION led a human-centered design process with stakeholders in Côte d'Ivoire. Through this process they looked at different ways to motivate men at highest risk for HIV to accept self-testing, to deliver the self-testing kits, to support the men before, during and after they take the test and to ensure that those who test positive begin treatment.

CCP will promote self-testing in barbershops, through religious leaders and via social media, directing interested men to an online self-assessment tool to determine their risk. Those deemed to be at high risk will then be offered a self-testing kit, which they can get in a number of ways: at the pharmacy or health center or delivered by a peer navigator who can answer any questions and walk them though the process. Deployed by local NGOs, peer navigators are trained to provide psychological and social support before, during and after HIV testing and the initiation of treatment.

As another channel for promotion and distribution, pregnant women who are receiving treatment to prevent them from transmitting HIV to their babies will also be told about self-testing and counselors will suggest their male partner receive a self-test. Adolescent girls and young women participating in the Super Go program, a support and education group, will also be supported in encouraging their male partners to seek self-testing.

There will also be tools to support men through the test itself, including written instructions, online videos, other supporting materials and access to an existing HIV hotline, whose workers will be trained in how to take a self-test, interpret the results and support men in the next steps after receiving the result to encourage them to begin treatment.

Once a man has taken his self-test and learned his result, peer navigators will be on hand through phone calls or text messages to support men who need to be referred for confirmatory testing and treatment.

"We are conscious that freedom and confidentiality are part of the charm of the self-test, so we are proposing a solution that strikes the balance between confidentiality and follow up," says Benjamin Soro, a program officer for CCP who is based in Côte d'Ivoire.

Self-testing may not only increase the number of people who know their HIV status, which is the first of the UNAIDS 90-90-90 goals, but it could reduce the workload for health systems that are often overburdened. The challenge that remains is making the link between taking the self-test at home and then going for any necessary follow up testing and treatment.

While the Côte d'Ivoire pilot is designed on a smaller scale, the hope is it will make an important contribution to understanding how to increase the number of men who know their status. And, if successful, self-testing may be rolled out further across the nation on a larger scale. 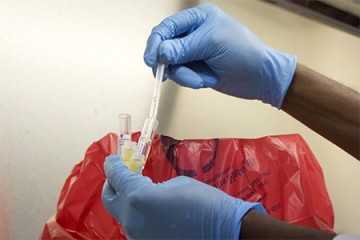 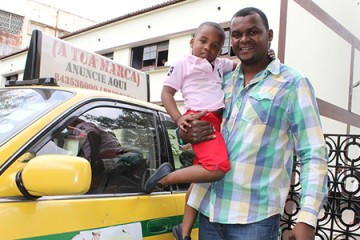