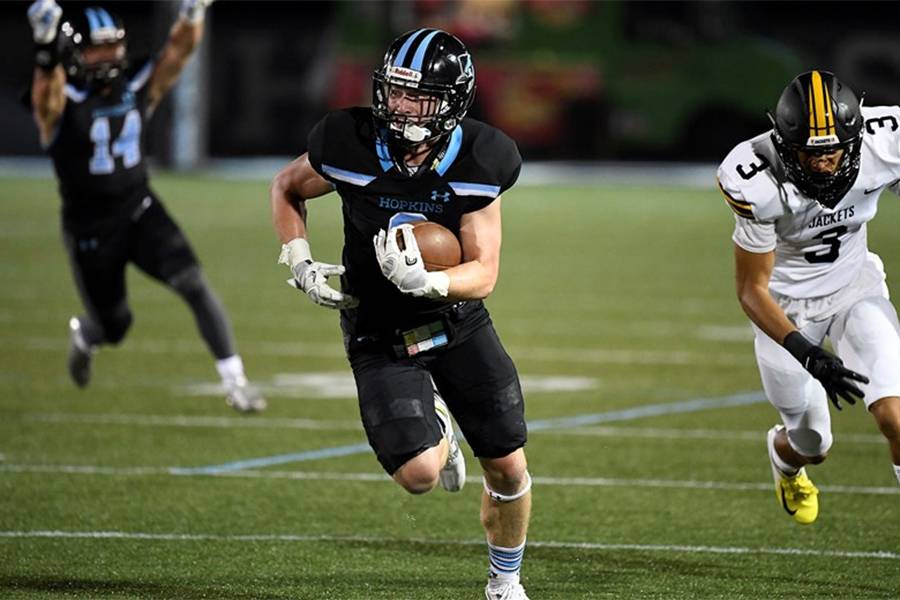 Image caption: Johns Hopkins sophomore Macauley Kilbane returned an interception 34 yards for a touchdown in the fourth quarter against Randolph-Macon on Thursday night.

The host Johns Hopkins football team outscored visiting Randolph-Macon 42-7 in the second half Thursday night, overcoming a three-point halftime deficit for a 63-31 victory in the season-opener for both teams at Homewood Field.

It marked the eighth consecutive win in a season-opening game for the Blue Jays (1-0), who improved to 69-2 in regular-season games over the past seven-plus seasons.

The game was the 300th for Hopkins coach Jim Margraff, who improved to 210-87-3 with the win and ranks fourth among active Division III coaches in career victories.

JHU needed just five minutes of the third quarter to turn a 24-21 halftime deficit into an 11-point lead. A 22-yard pass from junior quarterback David Tammaro to sophomore Ryan Hubley capped a seven-play, 70-yard drive to open the second half. After the Blue Jay defense force a quick three-and-out, Hopkins went 53 yards in four plays, with Tammaro finding senior Luke McFadden from 12 yards out to make it 35-24.

Randolph-Macon (0-1) sliced the deficit to 35-31 late in the third quarter, but the Blue Jays closed with 28 unanswered points, including a 37-yard scoring run from Stuart Walters and a 34-yard interception return for a touchdown by Macauley Kilbane. The JHU defense held the Yellow Jackets to 62 yards on 20 fourth-quarter plays, with 42 of those yards coming on Randolph-Macon's final drive of the game.

Tammaro led a 606-yard effort by the Hopkins offense, completing 21 of 33 passes for 349 yards and four touchdowns. Dane Rogerson had five receptions for a game-high 120 yards and one score, and Zac Fernandez added five catches for 75 yards and a TD. Complete box score

Th Blue Jays return to action on Sept. 8 when they travel to Susquehanna for their Centennial Conference opener against the River Hawks at 1 p.m.