Barbara Mikulski remembers John McCain for 'his character, his conviction, and his courage'

Former Senate colleague Barbara Mikulski remembers the late John McCain as a straight shooter, a courageous legislator, a patriot, a friend, and—despite their political differences—a staunch ally on issues important to them both. 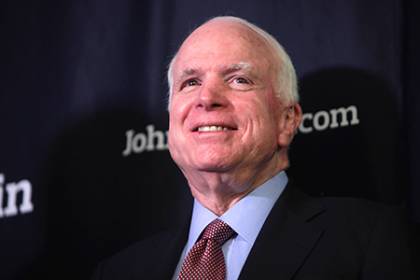 Image caption: John McCain, a U.S. senator since 1988 and the Republican presidential nominee in 2008, died Saturday at 81.

The Arizona Republican's death on Saturday at the age of 81 is a loss for all Americans, "who remember him for his patriotism, straight talk, and independence," said Mikulski, the former senator who is now professor of public policy and adviser to the president at the Johns Hopkins University.

Mikulski, who was the longest-serving woman in the history of Congress and Maryland's longest-tenured U.S. senator, recalled that she and McCain both moved together to the Senate from the House of Representatives in 1987. McCain was a former Navy pilot, recipient of the Silver Star and Bronze Star and a prisoner of war in North Vietnam for more than five years.

"As a colleague, I admired him for his character, his conviction, and his courage," Mikulski said. "We served together on the Intelligence Committee, and worked together on issues of national security, and advocated together for veterans' health care."

Mikulski said she "always" backed McCain in his advocacy for campaign finance reform, an issue on which he worked with Democrats on a bipartisan basis.

"And he was always responsive to the women of the Senate as we presented the unique needs of women who were wounded warriors," Mikulski said. "From improperly fitting prostheses to maternity care, he became a key champion."

Mikulski said that she and McCain—who spoke at Johns Hopkins commencement ceremonies in 1999—would often laugh about attending college in Maryland at the same time, he at the Naval Academy in Annapolis and she at what was then Mount St. Agnes College in Baltimore.

"We joked that, although we never danced at a mixer then, we certainly mixed it up in the Senate together over the years," Mikulski said. Referring to the bus McCain rode during his 2000 and 2008 presidential campaigns, she added: "I'm sure the angels are getting used to the 'Straight Talk Express' barreling through the heavenly gates."