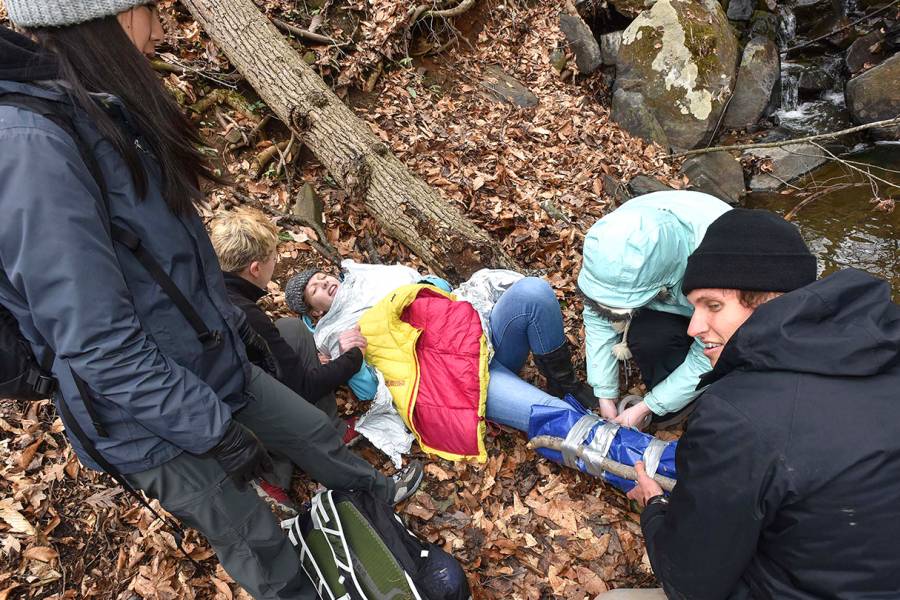 If a hiker falls in the woods …

This article was originally published by Dome, a Johns Hopkins Medicine publication.

Elizabeth Uhlig sprawls on the damp ground near a stream in Patapsco Valley State Park, her right leg twisted behind her. "Help," she calls to a group of people walking on a nearby road. "Can you help me?"

The four walkers veer toward her voice, crouching under a fallen tree and skirting past scratching branches before scrambling down the bank of the stream.

When they reach Uhlig, Jordan Tropf introduces himself.

"I'm almost a doctor," the fourth-year Johns Hopkins University School of Medicine student says. "How can we help you?"

Fellow fourth-year students Tracy Yang, Kelly Holz, and Rebecca Garbo begin assessing Uhlig's injuries. Holz pulls a down jacket out of her backpack and tucks it around Uhlig, who is shivering on the chilly spring day.

As the medical students work, Michael Ehmann perches on a nearby rock, taking notes. Ehmann, assistant professor of emergency medicine, is a leader of the Austere Medicine/Wilderness Medicine course, a popular two-week elective for School of Medicine students.

The course teaches future doctors how to practice medicine in limited-resource settings. Students spend some time in classrooms, and more in the woods. They're required to camp for three nights in the state park—sleeping in tents, cooking over open fires, and engaging in problem-solving challenges like the one Ehmann is now observing.

On this overcast afternoon, the 19 students in the course move in teams from station to station in the woods, developing treatment plans for volunteers including Uhlig, a third-year medical student with a smear of fake blood on her forehead.

Uhlig, who is not in the class, tells the students she fell off a log and bumped her head. She screams in pretend pain when they straighten her leg, and babbles to indicate she may have a concussion. 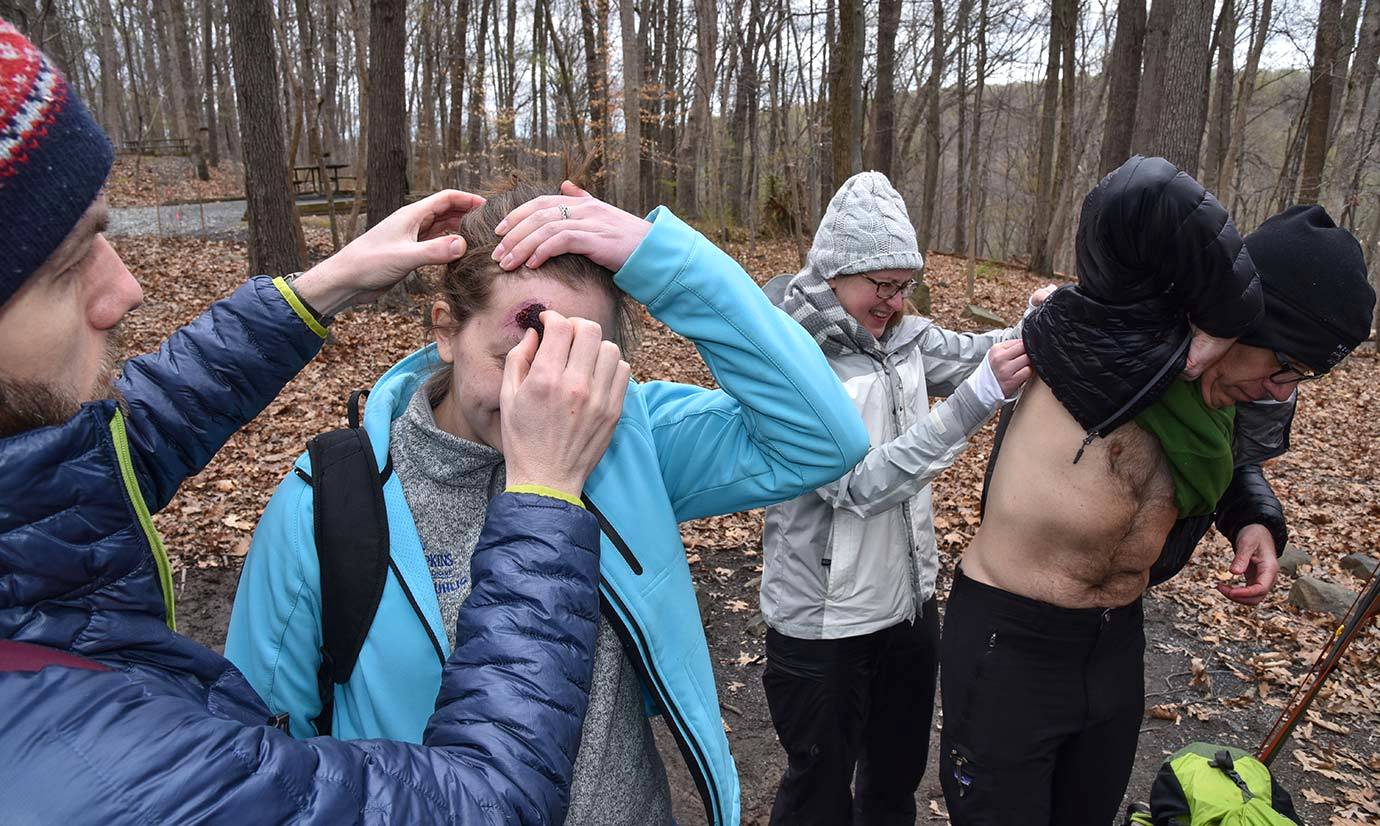 With Tropf as the leader, team members work together, discussing options and sharing responsibilities. They create a splint for Uhlig by using a folded tarp, duct tape, and sticks. Then they hoist her to her feet and help Uhlig hop toward the road, with Tropf and Holz positioned under her arms.

"And—scene," says Ehmann, indicating that the exercise is complete and the students can stop acting.

They gather around their instructor. He tells them what they did right: introducing themselves to the injured hiker, establishing a leader, communicating with the patient and with one another, checking for breathing issues or concussion, keeping Uhlig warm, straightening and stabilizing her leg. But Ehmann also tells them they failed to protect her spine and could have damaged it when they moved her.

"You have to assume an unstable cervical spine," he says before they go on to their next challenge.

Austere medicine combines aspects of public health, disaster recovery, and wilderness medicine to teach students how to provide health care outside the walls of a well-equipped hospital. The idea is gaining traction, but it was not well-known when the course began about 10 years ago.

"A lot of the techniques we teach are core tenets of emergency medicine: stabilizing the patient, treating the sickest patient first, thinking about resource allocation," Ehmann says.

Students learn to quickly take control of a situation, says Susan Peterson, assistant professor in the Department of Emergency Medicine. Peterson took the class as a medical student and now teaches it.

"An important basic piece is assigning someone to get external help," she says. Students are taught to "look someone in the eye and say, 'I want you to do this,'" instead of shouting "someone call 911" to nobody in particular, she says.

The class teaches medical skills such as wound-suturing and splinting, as well as survival and navigation skills like purifying water and reading a map and compass. 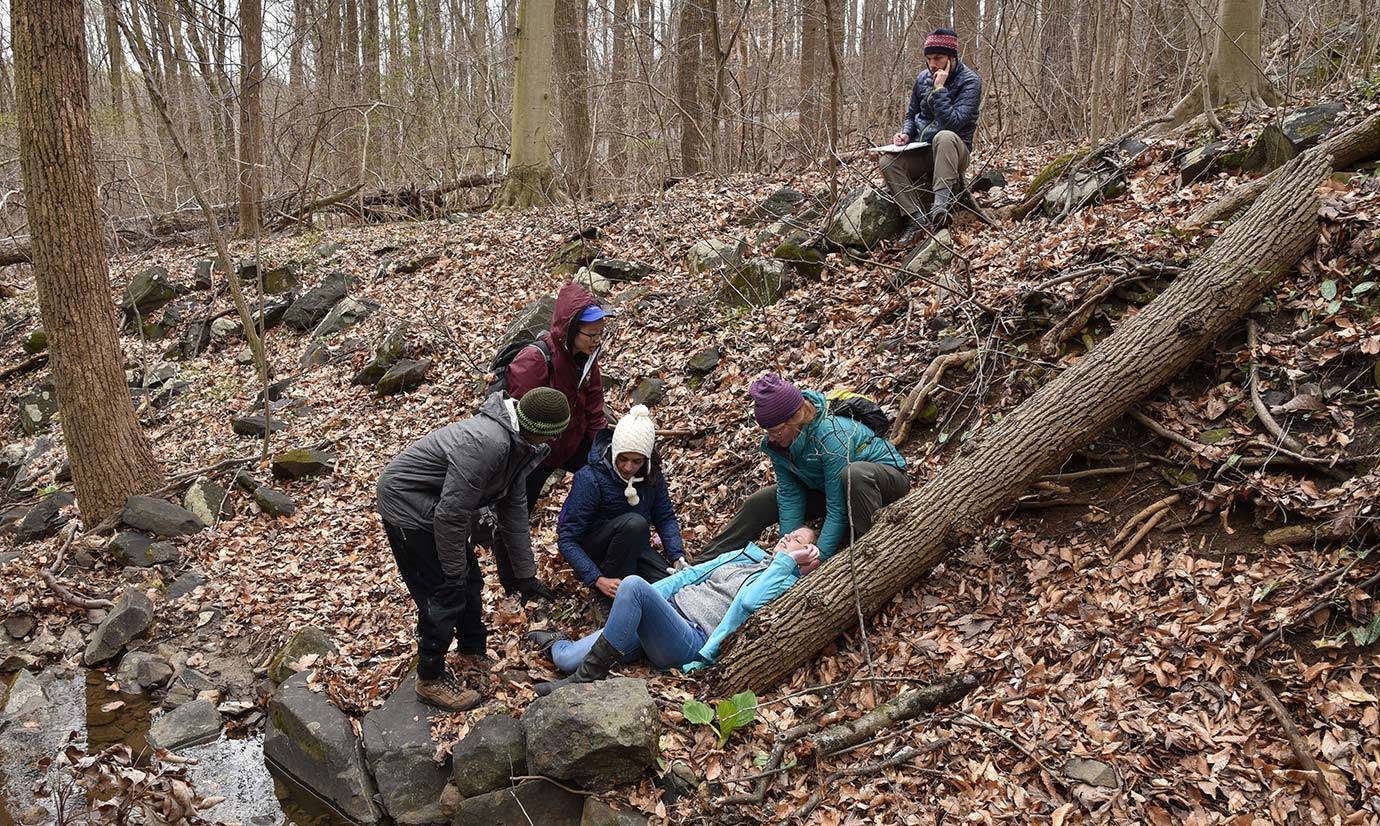 "In order to be successful, you've got to be really good at problem-solving," says Michael Millin, associate professor of emergency medicine and medical director for Maryland Search and Rescue and other organizations. "In the search and rescue world, we say, 'Does it work? Is it safe?' It doesn't matter if it's technically correct. In many ways, it's an art form because you're delivering medicine in a way that is very atypical."

On the first day of class, Millin explains how to create ad hoc toilets in disaster recovery zones by putting plastic bags inside cardboard boxes. He shows students how to safety-pin a swollen tongue to a patient's cheek so it doesn't block breathing. He describes the dangers of hypothermia and snake bites and tells students their top priority is to get home safely.

The class, offered each spring, attracts students with a range of backgrounds and aspirations. Some have been wilderness guides, camp counselors, or Peace Corps volunteers, while others are new to hiking and camping.

Some, such as aspiring emergency medicine doctor Holz and Tropf, who plans to be an orthopaedic surgeon, expect to work in disaster settings. Others are pursuing careers as varied as dermatology, ophthalmology, and psychiatry.

The course teaches skills and ways of thinking that are useful to all doctors, even those with no plans to practice medicine in war zones or wilderness, says Peterson, who once treated a family friend while out on a birthday-celebration boat ride. The woman, who was on blood thinners, had fallen, resulting in a skull fracture and intracranial bleeding. "I was the only one on the boat with any medical experience," says Peterson, who was starting her residency at the time.

"I want to be prepared in an emergency, such as on an airplane," says Sneha Shah, a fourth-year medical student going into internal medicine and cardiology. "We've been trained to do medicine in a hospital with all the resources we need. I want to practice creativity and thinking on the fly."