Bill Gates: 'I hope countries will compete in generosity'

In advance of visit to Congress, philanthropist and tech giant discusses the U.S. foreign aid budget and what it means for health care in the developing world 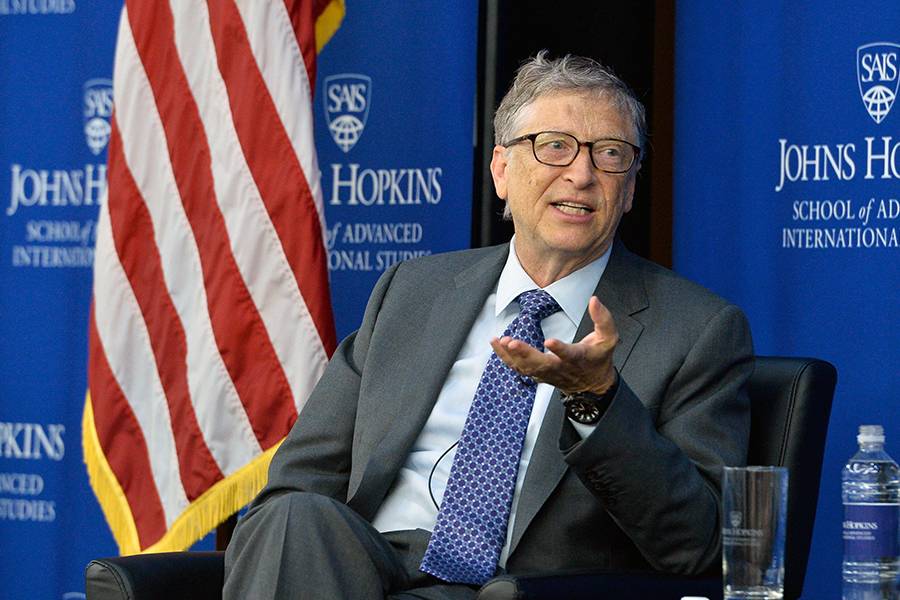 Bill Gates hopes that one day, countries will compete to be the most generous.

For example, when he looks at China's investments in health and development projects in parts of Africa, he doesn't just see a global adversary with whom the U.S. is teetering on the edge of a trade war—he sees a country providing support where it's needed most, he said during a talk Wednesday at the Johns Hopkins University School of Advanced International Studies in Washington, D.C.

Years ago, Gates said, China's economy wouldn't have sustained such economic investment in other countries. Now it's a major player on the international stage.

"Hopefully the U.S. will be more generous as China has become more generous," he said. "I hope countries will compete in generosity when it comes to the developing world."

"There is no Plan B, and if the U.S. cut this investment, [we don't know] what would happen."
Bill Gates

The billionaire founder of Microsoft visited SAIS to discuss philanthropy and health leadership around the world. A business magnate and humanitarian, he co-founded with his wife the Bill & Melinda Gates Foundation in 2000 to enhance health care and reduce extreme poverty around the world, and to increase access to education and technology in the U.S.

Gates planned his visit to coincide with an invitation from Congress to testify about U.S. investment in foreign aid—which Gates considers a crucial part of improving health around the world.

During his talk—which was moderated by Cinnamon Dornsife, associate practitioner-in-residence and senior advisor of international development at SAIS, and Jeremy Shiffman, a recently appointed Johns Hopkins Bloomberg Distinguished Professor of global health policy—Gates discussed the importance of U.S. investment in the developing world, especially in terms of health. 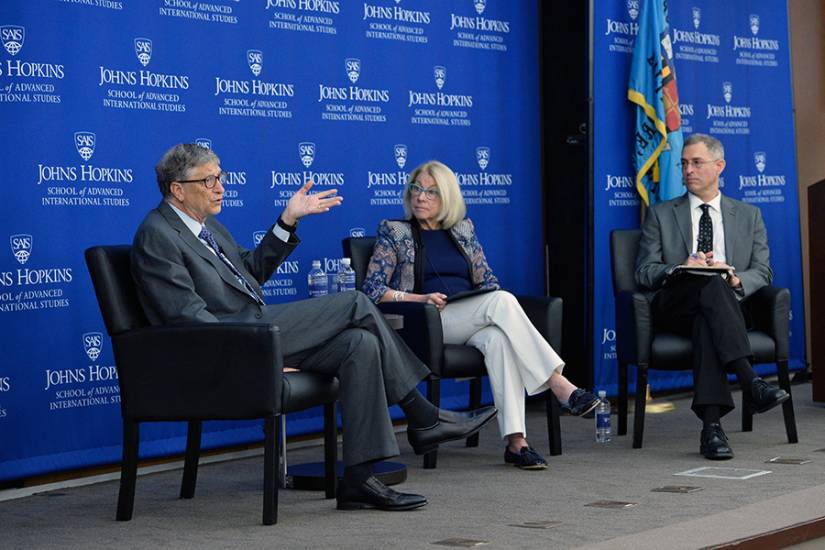 Image caption: The U.S. is disproportionately generous, contributing roughly 23 percent of the total global aid budget, which is $130 billion. But Gates said it was concerning that the Trump administration has called for drastic cuts to such investments under the State Department budget.

Aid investment, he said, grew significantly in the year 2000, doubling from 0.1 percent of the U.S. gross domestic product under the Clinton administration to 0.2 percent of the GDP during the Bush administration. The current U.S. budget for foreign aid is between 0.2 and 0.3 percent, equaling roughly $30 billion.

The U.S., Gates said, is disproportionately generous, contributing roughly 23 percent of the total global aid budget, which is $130 billion. But he said it was concerning that the Trump administration has called for drastic cuts to such investments under the State Department budget.

He noted that foreign investment has been proven to save lives. In the developing world, he said, the number of child deaths from infectious diseases has been more than halved by the use of vaccines—from 12 million deaths each year from disease in 1990 to fewer than 5 million deaths a year in 2018. The dramatic reduction, he said, was a result of efforts by governments such as the U.S., as well as health organizations and the Gates Foundation.

"We see a path that if countries remain generous and we take advantage of the latest science, we'll get that number down to 2.5 million a year," he said.

And it's not just health-related issues—foreign investment has led to a variety of measurable, valuable improvements around the world, he said.

"Objectively, by almost any metric—the number of people being educated, how long people live, the prevention of disease, … even how democratic governments are—this period since World War II has been unbelievable," he said. "There's been reduction in violence, improvement in literacy, improvement of health … . The world is a much better place today than ever in its history."

But he suggested that health organizations and governments, and the U.S. in particular, should not be satisfied with the strides already made.

"It's important for the U.S. to stay strong [internationally]," he said. "It's hard to overstate how much people count on the U.S., and until recently they always had the expectation that the U.S. would be there. … There is no Plan B, and if the U.S. cut this investment, [we don't know] what would happen."