The concept of health equity is one that defies simple definition, but Johns Hopkins expert Lisa Cooper has a way of explaining it plainly.

"It's when everyone has fair opportunities to achieve optimal health, and no one is prevented from doing that based on socially determined circumstances," she said, referencing the foundational idea developed by the World Health Organization more than 30 years ago.

It gets more complicated when wading into what those circumstances may be—race, income, ZIP code, and education, to start—which is why the word "health" only scratches the surface of the inequities that compound this field.

"Health care is probably 10 percent of what makes us healthy," Cooper said Wednesday morning at a forum in Baltimore. "But it's an important 10 percent."

Health care's role in health may be one of many, but it is of course crucial, especially in prevention, proactive measures and knowledge dissemination, says @LisaCooperMD of @HopkinsMedicine at #AtlanticHealingDivide pic.twitter.com/tUdrfMjqqf

Cooper, a Bloomberg Distinguished Professor at Johns Hopkins and director of the Johns Hopkins Center for Health Equity, was among several experts who spoke at an Atlantic forum, "Healing the Divide", which explored various aspects of the city's health disparities. The event was presented with the support of Johns Hopkins University and included a 10-minute conversation with two fellows from the university's Bloomberg American Health Initiative.

Cooper has devoted most of her career to addressing these issues through her research and practice. The center she leads works to advance scientific research, policy changes, and community outreach with the goal of reducing health disparities for socially at-risk populations.

In Baltimore, Cooper said, she and other Hopkins experts hear a common refrain from community residents: "Why is it that we live so close to one of the largest, most prominent medical institutions … yet people in our neighborhoods are dying?"

Cooper's center takes a cross-disciplinary approach, bringing together researchers across several schools at Hopkins, including Public Health, Medicine, and Nursing. The center is currently working on two major studies that tackle a similar theme: community intervention as a means of reducing cardiovascular risks.

The second study looks at the effectiveness of dietary coaching among African-American participants in Baltimore who suffer from chronic kidney disease and hypertension. The project, titled Five, Plus Nuts and Beans for Kidneys, promotes a potassium-rich diet and gives participants $30 a week to spend at local grocery stores.

At the forum, Cooper emphasized the need to address mistrust among communities that take part in such research by including local residents and organizations as equal partners. The key, she said, is nurturing long-term commitments with personal respect.

Complementing her center's local work, Cooper, who was born in Liberia, is also examining global health equity. She plans to launch a series of networking events and symposia this fall, in partnership with the Johns Hopkins Alliance for a Healthier World, to bring together researchers, students, and community partners who are focused on health disparities across the country and abroad. 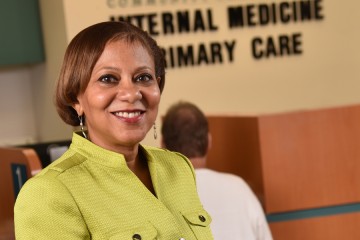