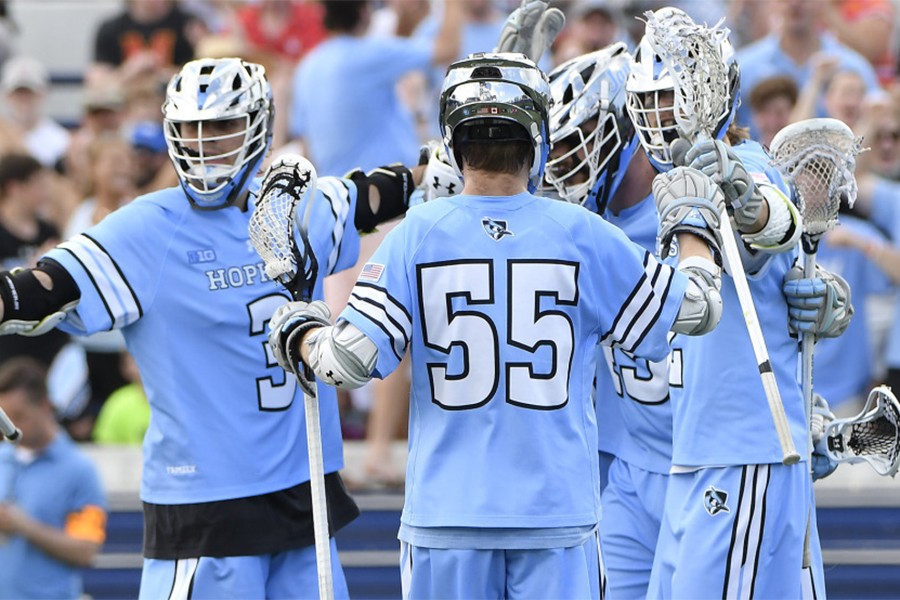 Down four goals heading to the fourth quarter of an NCAA quarterfinal matchup against Duke, the Johns Hopkins men's lacrosse team did what it has done all season—it rallied. But on Sunday afternoon in front of an announced crowd of 13,047 at Navy-Marine Corps Memorial Stadium in Annapolis, the Blue Jays comeback efforts came up short.

Duke's Nakeie Montgomery scored back-to-back goals in a span of 60 seconds late in the fourth quarter to jump-start a 5-1 game-ending run for the Blue Devils, who went one to knock off Hopkins, 14-9, ending the Blue Jays season.

The fourth-seeded Blue Devils (15-3) advanced to the national semifinals, where they will take on Maryland. Johns Hopkins finished the season at 12-5.

Hopkins trailed 9-5 at the end of the third quarter after Duke scored twice in the final 16 seconds of the quarter. But JHU quickly closed the gap. A 12-yard laser from senior Patrick Fraser just under three minutes into the final period ignited a three-goal run for Johns Hopkins, which was within 9-7 two minutes after Fraser's goal on a Chris Hubler tally in transition and then within one at 9-8 three minutes later when junior Kyle Marr scored in tight off a failed Duke clear.

But less than a minute later, Montgomery isolated on the wing and scored on the run, then scored off the same play 60 seconds later to spark the game-clinching spree for the Devils.

Marr temporarily halted the run with his second goal of the game with 3:37 to play, but Justin Guterding and Joe Robertson struck for late goals to account for the 14-9 final score. Complete box score

Duke got on the board 1:16 into the contest and never trailed, lead 4-1 after the first quarter and 7-3 at the half. It marked the second consecutive season that JHU's season ended with an NCAA tournament loss to the Blue Devils.

Marr paced a balanced Hopkins attack with two goals and an assist. Cole Williams added two goals, and Shack Stanwick has two assists in his final game with the Blue Jays. Fraser, Hubler, and Jake Fox each had a goal and an assist.