Through his work and mentorship programs, Robinson has supported young scientists from across Baltimore

Douglas Robinson, a professor in the Department of Cell Biology, has been recognized by Johns Hopkins University with a $50,000 prize for assisting diverse scholars—ranging from high schoolers to graduate students—to succeed in scientific fields. 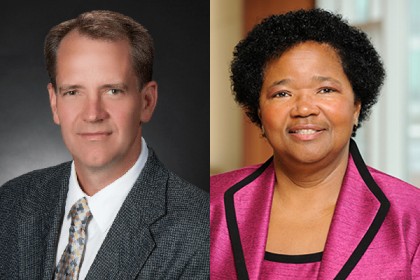 Image caption: Douglas Robinson (left) was awarded the Provost's Prize for Faculty Excellence in Diversity, and Phyllis Sharps was named a finalist for the award.

Seven of Robinson's colleagues—led by Peter Devreotes, director of the Department of Cell Biology—noted in a nomination letter that Robinson should receive the Provost's Prize for Faculty Excellence in Diversity because he has involved high school, undergraduate, doctoral, and postdoctoral students from a variety of backgrounds in his research for 16 years, and the research itself reaches across a variety of disciplines within medicine.

Robinson also founded the Summer Academic Research Experience, or SARE, which is now in its 10th year and seeks to expose high school students from Baltimore to scientific research while providing tutoring on academic skills and guidance on building professional skills as well.

"SARE targets this disadvantaged population at an earlier age in a very focused and intensive manner, allowing for substantial impact on the students' lives and careers," the letter states.

Additionally, Robinson worked with faculty and administrators to start several key programs at Johns Hopkins that help a diverse group of students pursue professional careers in science and medicine. He and his team created an umbrella program, known as the Johns Hopkins Initiative for Careers in Science and Medicine, which includes four programs: SARE and Biophysics Research for Baltimore Teens, which are for high school students; a new branch of the School of Medicine's Summer Internship Program called CSM SIP, which is for undergraduates; and the Doctoral Diversity Program, which assists postbaccalaureate scholars as they prepare for and pursue medical school or graduate biomedical education. By this summer, the CSM initiative will have served 200 scholars across all its programs.

"Creating opportunities for exceptional students from a variety of backgrounds to be able to pursue their dreams of becoming physicians and scientists has been enormously fulfilling for me, as well as our whole team," Robinson said.

Robinson received the prize at the annual Diversity Recognition Awards Ceremony on the university's Homewood campus on Tuesday. The prize, established in 2016, recognizes a full-time faculty member who has made scholarly or creative contributions related to diversity. Previous recipients are Lester Spence, an associate professor of political science and Africana students, and Lisa Cooper, a Bloomberg Distinguished Professor at the School of Medicine and the Bloomberg School of Public Health.

"Inclusion of diverse perspectives and experiences is essential to building excellence at Hopkins," said Susan Courtney, vice provost for faculty affairs. "This event is a great opportunity to celebrate that fact."

The Office of the Provost also recognized one finalist, Phyllis Sharps, associate dean for community programs and initiatives at the School of Nursing. Sharps, who received a $10,000 honorarium, was chosen for mentoring and supporting students, particularly those of color, and for her research in maternal and child health, which has led to effective interventions for vulnerable individuals in the community.

The award ceremony is hosted by the Johns Hopkins Diversity Leadership Council, which recognized 10 individuals and one group for their contributions in advancing and celebrating diversity and inclusion at Johns Hopkins. They are: 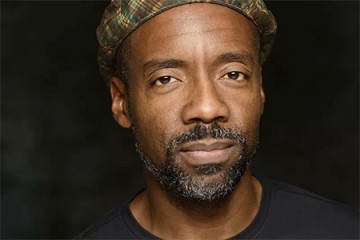 Published May 15, 2017
Associate professor will be among those honored at annual Diversity Recognition Awards Ceremony