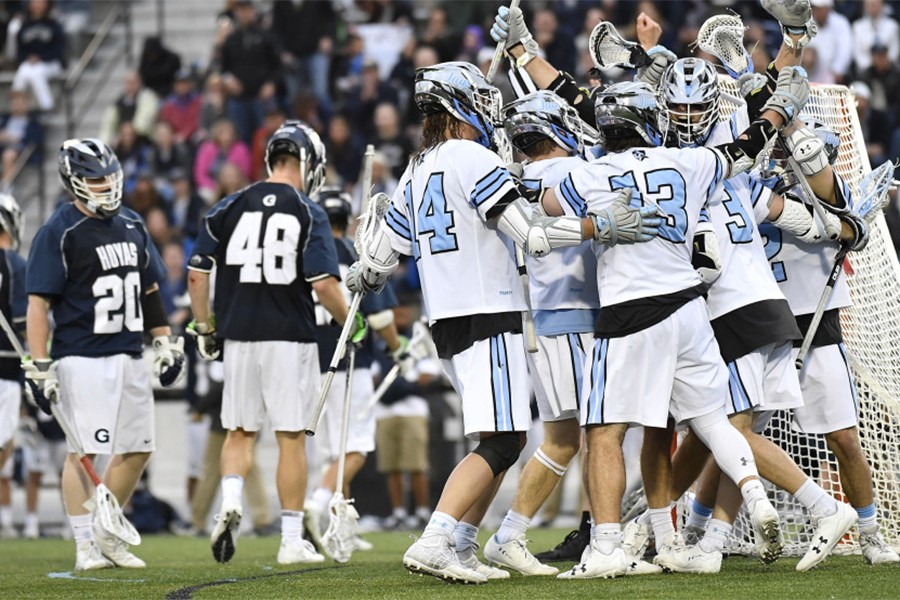 Image caption: Hopkins players celebrate Shack Stanwick's overtime goal, which gave the Blue Jays a 10-9 win against Georgetown and sent them to the NCAA quarterfinals.

Shack Stanwick played in his final home game at Homewood Field on Sunday evening, but his overtime heroics ensured that it wouldn't also be the last game of his college career.

The Hopkins senior completed a stirring comeback by the Blue Jays, beating his defender on the wing and slipping a shot past Georgetown goalie Nick Morocco in sudden-death overtime to lift JHU to a 10-9 win against the Hoyas in an NCAA tournament first-round game.

It was an unlikely ending to a game in which Hopkins had to rally from a five-goal second-half deficit just to force extra time. With the win, JHU improved to 45-5 all-time in NCAA tournament games played at Homewood Field.

The fifth-seeded Blue Jays (12-4) advanced to face No. 4 seed Duke in the quarterfinal round on Sunday at Navy–Marine Corps Memorial Stadium in Annapolis, Maryland. Complete NCAA tournament bracket

Hopkins scored the game's first three goals, then watched Georgetown (12-5) score eight straight to take an 8-3 lead midway through the third quarter. Joel Tinney found the net to bring the Blue Jays within 8-4, and then junior Kyle Marr took over, scoring five goals in the final quarter to bring Hopkins back from the brink of elimination. His goal with 4:03 to play, off Stanwick's fourth assist of the game, knotted the score at 9.

Depth, experience rally Hopkins past Georgetown in OT in NCAA first round

Georgetown won the opening possession of overtime, but junior Danny Jones forced a turnover and the Blue Jays cleared and called timeout with 1:15 on the clock; 46 seconds later Stanwick had scored the game-winner.

Marr (5 goals, 2 assists), Stanwick (1 goal, 4 assists), and Tinney (3 goals, 1 assist) did the bulk of the scoring for JHU, and goalkeeper Brock Turnbaugh made four saves.

Sunday's quarterfinal between Hopkins and Duke is scheduled for 2:30 p.m.; top-seeded Maryland will take on Cornell in the other quarterfinal game played at Navy.