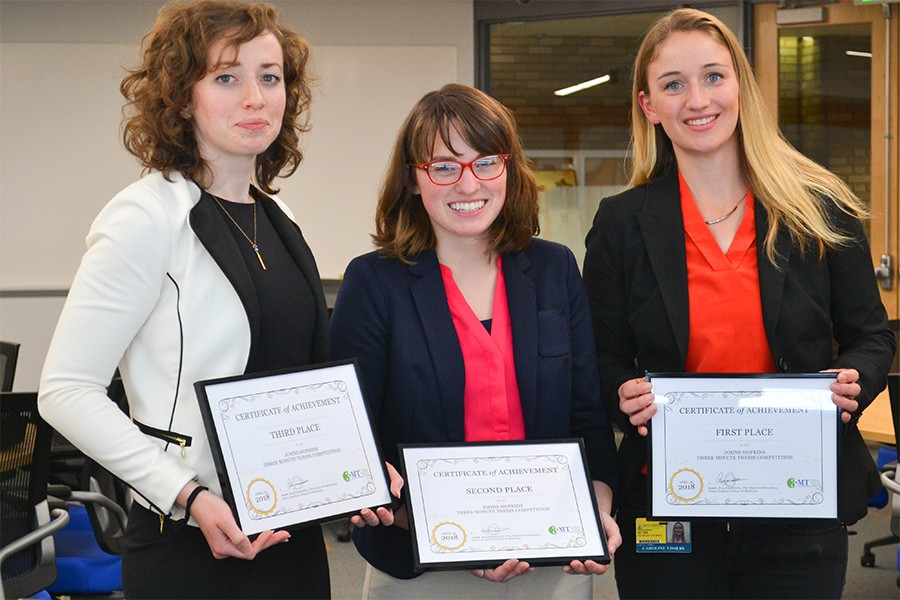 It takes months of intense research and writing to finish a PhD thesis, so imagine the difficulty of summing it all up in three minutes.

Hundreds of universities around the world now see value in that challenge, including Johns Hopkins, which hosted its own 3-Minute Thesis event this spring and sent three finalists on to a state competition.

The "3MT" concept was first conceived a decade ago at the University of Queensland, eventually catching on throughout Australia and then across the world. The aim isn't to water down the research, organizers say, but to command immediate interest in it—in tight, compelling fashion, light on the academic jargon. The challenges give PhD students, often immersed in their specialities, a rare chance to share and promote their work with a wider audience.

"It helps people get interested in science and have a better understanding of what I do in my everyday life."
Caroline Vissers
First place, Hopkins 3MT challenge

At Johns Hopkins, 27 doctoral candidates rose to the 3MT challenge last month, with 10 finalists making it to the final competition on April 18. At that event, Caroline Vissers of the School of Medicine took both the first place prize ($1,000) and the people's choice award, summing up her work on RNA modifications in brain cells.

Vissers says the challenge, on top of providing critical practice in public speaking, encouraged her to give careful thought to how she describes her highly technical research to a general, non-expert audience.

"It helps people get interested in science and have a better understanding of what I do in my everyday life," Vissers says.

This was the third year the JHM Professional Development and Career Office hosted the competition and the first year it was open to PhD candidates from all Johns Hopkins academic divisions.

Vissers and two other finalists from Hopkins—Valerie Rennoll of the Whiting School of Engineering, and Sarah Attreed of the Bloomberg School of Public Health—moved on to a state 3MT challenge on May 2 at the University of Maryland Medical Center.

At that competition, which informally gathers participants from a handful of local institutions, Atreed placed second with her presentation on "Building a Better Vaccine," and Rennoll took the people's choice award for her research on tunable acoustic transducers.

At all 3MTs, researchers take to the stage before an audience and judges with no tools beyond a single PowerPoint slide.

Why three minutes? In Queensland, the idea was hatched at a time of severe drought, when residents were encouraged to limit their showers—via egg timer—to three minutes total. While putting that in practice, one dean saw the potential value of applying the same time limit to doctoral research.

Since then, more than 600 universities and institutions in more than 65 countries have embraced the 3MT challenge.