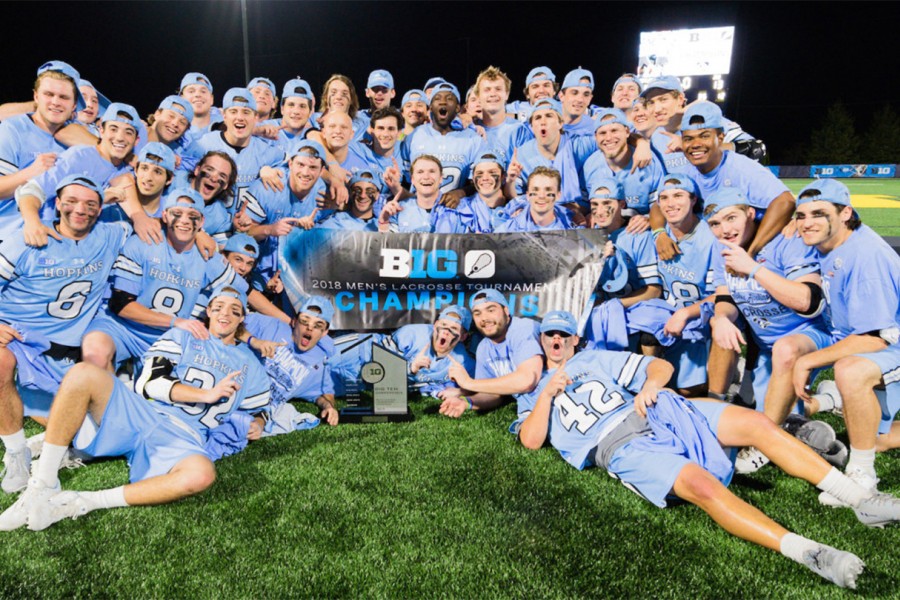 One week after a heartbreaking triple-overtime loss against Maryland, the Johns Hopkins men's lacrosse team exacted a measure of revenge against the Terps on Saturday night—and in a game in which something more was at stake.

Down 7-5 early in the second half of the Big Ten tournament championship game in Ann Arbor, Michigan, the Blue Jays used an 8-1 run to take charge en route to a 13-10 win against the top-seeded Terrapins.

The win gave No. 7 Hopkins (11-4) its second Big Ten championship in four years and secured an automatic bid to the NCAA tournament for the Blue Jays. Tournament pairings will be announced Sunday night at 9 p.m. Update: The Blue Jays earned the No. 5 seed in the 17-team tournament and will host Georgetown (12-4) in a first-round game on Sunday at Homewood Field at 5 p.m. Complete NCAA tournament bracket

JHU sophomore Cole Williams jump-started the game-turning run with an unassisted goal just 65 seconds after Will Snider had scored his second straight to give No. 3 Maryland (12-3) a 7-5 lead. Beginning with that goal, Hopkins scored on eight of 16 second-half shot attempts.

Williams scored three more times during the decisive run—netting three consecutive goals in the fourth quarter to push the lead to 13-8—and Thomas Guida also had two second-half scores. Williams paced the JHU attack with five goals and an assist, Guida had three goals, and Kyle Marr chipped in a pair of goals to go with three assists. Complete box score

Williams and Marr were named to the all-tournament team along with defenseman Patrick Foley, long-stick midfielder Robert Kuhn, and goalkeeper Brock Turnbaugh, who was named tournament MVP after recording 14 saves against the Terps.

Saturday's win came one week after Maryland earned an 8-7 win in three overtimes at Homewood Field, giving the Terps the top seed in the conference tournament.

Hopkins was fortunate to be in position to play for the title after coming from behind to beat Ohio State 6-5 in Thursday's semifinal round. Alex Concannon's goal with 11.3 seconds remaining clinched it for the Blue Jays, and Turnbaugh matched a career high with 16 saves.