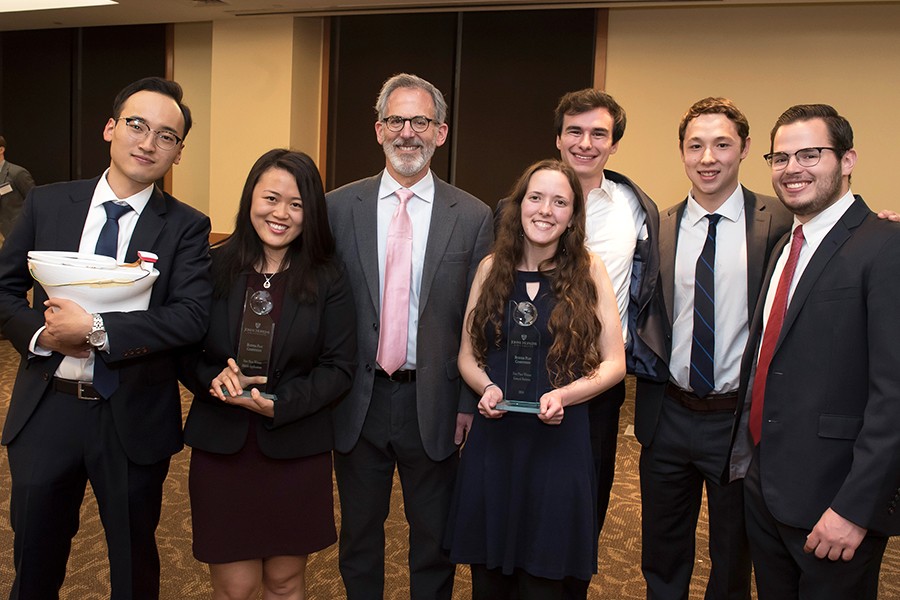 Image caption: Among the winners at the 2018 Johns Hopkins University Business Plan Competition were Toi and Oravi. From left: Baekchun Kim and Bertha Hu of Toi; Lawrence Aronhime, one of the business plan competition advisors; and Rachel Kinney, Harrison Cohen, Michael Ashmead and Rachmiel Naness of Oravi.

Johns Hopkins engineering teams won first place in each of the four categories at the 19th annual Johns Hopkins University Business Plan Competition in a day-long event Friday that capped months of preparation and prototyping.

More than 45 judges, many of them Johns Hopkins alumni, evaluated the teams' business plans and winnowed them down from more than 50 entries to 27 finalists who competed for more than $55,000 in prize money.

"Some of these companies are going to go live. … And even for those that don't, these students are building skills that will take them wonderful places in the future."
Pam Sheff
Director, Center for Leadership Education

Leslie Silverglide, WSE '02, co-founder and CEO of Mixt, a quick-service restaurant chain in California, opened the program with a keynote address in Charles Commons. She encouraged students to seek out mentors and take advantage of interesting internship opportunities.

"Every day, you will have a new set of problems," she told the packed room. "And you have to take them one at a time."

The students went on to pitch their ideas, including a concert truck to deliver high-quality classical music, an online platform to help college students chart their academic goals, and a personalized approach to treating type 2 diabetes.

"This is our signature event," said Pam Sheff, Director of the Whiting School of Engineering's Center for Leadership Education. "These students have been working for nearly a year, developing their pitches and trying to build their companies. It's serious business. Some of these companies are going to go live. … And even for those that don't, these students are building skills that will take them wonderful places in the future."

Another team recognized was Team Med Scholar, Bloomberg School of Public Health students who are developing an online platform to train and support health care workers throughout Africa. That team, including Olufemi Erinoso, Joe Amoah, and Ariel Caldwell, received $2,700 for the Accenture Award, given by Johns Hopkins alumni who work for Accenture and collected from voluntary donations.