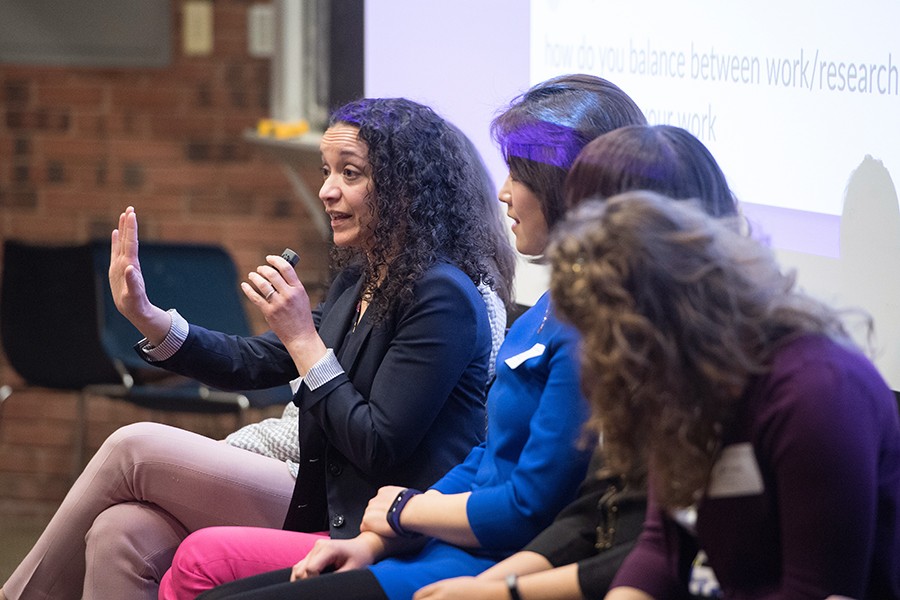 An inspiring lineup of 21 women in the STEM community shared information, advice, and lessons learned along their paths to professional and personal success during the first annual Women in STEM symposium, held Saturday on Johns Hopkins University's Homewood campus.

Hosted by the Women of Whiting, an organization that supports female graduate students in STEM at Johns Hopkins, the symposium featured discussions on communication and negotiation strategies, work-life balance, and career planning. While panelists encouraged young women to celebrate their successes, they were also candid about the often hard lessons they learned from their own experiences.

"Always look like you belong there. You've worked hard, so take your seat at the table," said Elyse Heob, an MBA/MPH candidate at Hopkins and co-founder of ClearMask, which has developed a transparent facemask to enhance communications between caregivers and patients. "You deserve to be there."

Castellano earned her master's degree in engineering management from Hopkins in 2011. She now works as director of program finance at Abt Associates, a global research firm dedicated to improving the lives of people worldwide.

Mindy Farber, a civil rights attorney and alumna who graduated in Hopkins' first co-ed class in 1974, said that she's always been inspired by her favorite childhood movie, The Wizard of Oz.

"Just remember, Dorothy got herself back to Kansas," she said. "Behind every successful woman is herself." 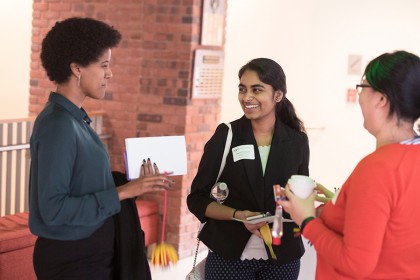 For Stephanie Canington, a third-year PhD candidate in the School of Medicine's Center for Functional Anatomy and Evolution, the symposium provided a welcome opportunity to network with other women doctoral candidates from different departments.

"It's nice to talk to other students and see how they deal with the stress of being in graduate school," Canington said. "At Hopkins, you're surrounded by incredible researchers and opportunities, but that can be overwhelming at times. I especially liked the discussion about being assertive and knowing how to say no."

Students from Towson, Morgan State, Loyola, the University of Maryland, UMBC, and George Washington attended the symposium. In addition, neighboring universities have expressed interest in starting organizations similar to Women of Whiting.

Alexandra Sneider, a second-year doctoral candidate in chemical and biomolecular engineering and co-president of the group, said the symposium is an important step in promoting a growing network for graduate women throughout Maryland and beyond.

"We're trying to start a dialogue that supports, provides different opportunities for, and creates an inclusive environment for graduate women in STEM," she said. "Hopefully this organization and event are not unique to Hopkins, and other universities will build off these ideas."

Added Inez Lam, a second-year doctoral candidate in biomedical engineering and Women of Whiting co-president: "While there's focus on professional development, we also emphasize personal connections. It's important that women in STEM don't feel alone. Through WOW, we want to make sure that everyone who feels isolated in this environment has a community they can turn to."