Lawyer and social justice activist Bryan A. Stevenson, who founded an organization that has helped more than 125 wrongly condemned people on death row, will speak at Johns Hopkins University's commencement ceremony on Thursday, May 24.

Stevenson, who works tirelessly to challenge the legacy of racial discrimination and poverty in the American criminal justice system, will receive an honorary doctor of humane letters degree at the event, where about 7,000 Johns Hopkins undergraduates, graduate students, and professional students will also be awarded their degrees. 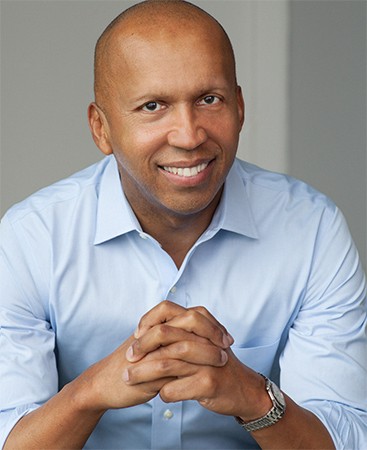 "A lawyer, advocate, and author of unwavering integrity and compassion, Bryan Stevenson has devoted his life to confronting injustice in our legal system and our society," said Johns Hopkins University President Ronald J. Daniels. "Bryan's persistence and, above all, hope in the face of extraordinary challenge is a powerful example for the Class of 2018 as they leave us prepared—and determined—to make a difference in our world."

As founder and executive director of the Equal Justice Initiative in Montgomery, Alabama, Stevenson takes on cases others consider expensive, exhausting, and unwinnable because, he says, "each of us is more than the worst thing we've ever done." His successful track record before the U.S. Supreme Court includes winning a historic ruling declaring that it is unconstitutional to sentence any child 17 or younger to life without parole. Outside the courtroom, he has initiated major anti-poverty and anti-discrimination efforts to educate communities about slavery, lynching, and racial segregation.

"Justice needs champions, and Bryan Stevenson is such a champion," Tutu wrote. "His courage and commitment contributed to the abolition of the death penalty for juveniles, and he is working tirelessly to end life sentences for adults convicted of crimes committed in their youth."

"Bryan's persistence and, above all, hope in the face of extraordinary challenge is a powerful example for the Class of 2018 as they leave us prepared—and determined—to make a difference in our world."
Ronald J. Daniels
President, Johns Hopkins University

Stevenson is a professor of law at the New York University School of Law. He earned his bachelor's degree in 1981 from Eastern University in St. Davids, Pennsylvania. He then went to Harvard University, where he won a full scholarship and earned both a master's degree in public policy from the Kennedy School of Government and a JD from Harvard Law School.

The many awards and honors for his work include the MacArthur Foundation "genius grant" in 1995 and the American Civil Liberties Union's National Medal of Liberty. Fortune included him on its 2016 and 2017 lists of World's Greatest Leaders.

Stevenson is the author of New York Times best-seller Just Mercy, which Time called one of the 10 Best Books of Nonfiction for 2014. The book tells the stories of some of his cases, including that of a man sentenced to die in Alabama for a murder he didn't commit.

"You don't have to read too long to start cheering for this man," The New York Times wrote about the book. "Against tremendous odds, Stevenson has worked to free scores of people from wrongful or excessive punishment, arguing five times before the Supreme Court. And, as it happens, the book extols not his nobility but that of the cause and reads like a call to action for all that remains to be done."

This month the Equal Justice Initiative will open a museum built on the site of a former slave warehouse in downtown Montgomery. The Legacy Museum: From Enslavement to Mass Incarceration will be a companion to a national memorial to victims of lynching called the National Memorial for Peace and Justice, which will open at the same time.

Johns Hopkins University's commencement ceremony will be held at Royal Farms Arena in Baltimore. The event is not open to the public.