Men's lacrosse: No. 11 Hopkins handles No. 14 Towson in opener

Nine different players scored and the Johns Hopkins men's lacrosse dominated the first half en route to a convincing 14-6 win against Towson in the season-opening game for both teams Saturday night at Homewood Field. 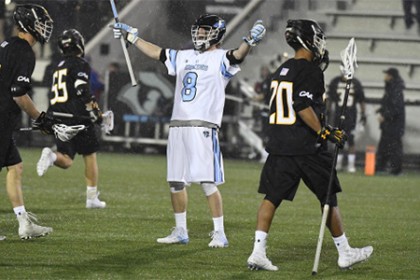 Image caption: Junior defenseman Patrick Foley celebrates after his goal opened the scoring 1:54 into the game.

The No. 11 Blue Jays (1-0) scored the first five goals of the game and 11 of the first 13 against the 14th-ranked Tigers. JHU has won 11 consecutive season-openers.

Goalkeeper Brock Turnbaugh made 13 saves in net for the Blue Jays.

JHU returns to action Saturday when it visits Loyola at 1 p.m.