For the first time in its history, Johns Hopkins sits atop the final Learfield Directors' Cup standings at the end of a season. On the strength of a fifth national championship in six years in women's cross country and appearances in NCAA championship competition by five other teams, Johns Hopkins totaled 383 points this fall to top the rankings.

Prior to this year, Hopkins had ranked as high as third on three different occasions at the end of the fall season, in 2012, 2013, and 2016). In 2014-15, JHU finished a program-best second overall after points for the fall, winter, and spring athletics seasons were compiled.

Hopkins' six NCAA-qualifying teams were the most in program history in the fall and the most of any Division III school in the nation this fall.

The Learfield Directors' Cup was developed as a joint effort between the National Association of Collegiate Directors of Athletics (NACDA) and USA Today. Through the course of the year, Directors' Cup points are awarded based on a school's finish in up to 18 sports—nine men's and nine women's—in NCAA Championships. 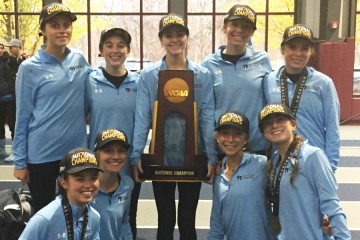