Two professors from Johns Hopkins University's Department of Physics and Astronomy have been named fellows of the American Association for the Advancement of Science in recognition of their scientifically or socially distinguished work. 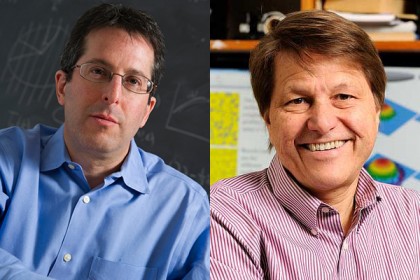 Image caption: Marc Kamionkowski (left) and Mark Robbins are both faculty members in the Krieger School's Department of Physics and Astronomy

Marc Kamionkowski and Mark Robbins are among 396 AAAS Fellows named this year, an honor presented to AAAS members by their peers. The distinction is unrelated to the annual list of AAAS fellows announced each spring by the American Academy of Arts and Sciences.

Kamionkowski was selected for his contributions to theoretical astrophysics and cosmology, specifically his work on the theory of the cosmic microwave background, or CMB. The CMB is the faint electromagnetic radiation remaining in the cosmos as a relic of the first, super-heated microseconds of the life of the universe.

Robbins, who specializes in the physics of condensed matter—solids and liquids are the most familiar examples—was recognized for "using simulations to reveal the microscopic origins of macroscopic behavior" of matter.

"It's of course a great honor," Kamionkowski said. "The members of the JHU faculty and of the Space Telescope Science Institute who have already been inducted as AAAS Fellows are each very accomplished scientists—people who have done great things for science. It's nice to be counted among them."

The new fellows will be formally recognized during the 2018 AAAS Annual Meeting in Austin, Texas, in February.