At Johns Hopkins, many students turn to group study for academic support

Andrada Diaconescu was unsure if she wanted to pursue a chemistry major when she started out at Johns Hopkins University. She set out to do well in her introductory chemistry courses and joined a group of students who wanted help with the course load. An upperclassman led each session, also brought snacks, and managed to teach Diaconescu how to enjoy a subject that many disliked. 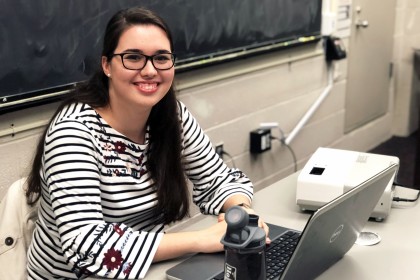 "It turned out to be one of the best decisions I've made while at Hopkins," said Diaconescu, a senior chemistry, Spanish, and biology major. "… I had the opportunity to meet on a regular basis with somebody who was passionate about the material and ultimately convinced me to pursue the chemistry major. I don't know that I would be saying the same thing now if it weren't for [the program]."

Since then, Diaconescu has attended academic support groups for general chemistry, physics, calculus, and organic chemistry.

JHU's Office of Academic Support, located in Garland Hall on the Homewood campus, offers three programs that help students succeed in their classes. Fellow students administer each program's sessions. They include:

PILOT, The Study Consulting Program, and the Learning Den are free and open to all students.

"We're here to support any type of student," said Ariane Kelly, assistant director of Academic Support. "We don't just support students that are struggling. We work with very high-achieving students as well."

"[It's] a very satisfying experience," Diaconescu said. "I have the opportunity to not only work with students on a subject I am passionate about, but to assist them through the transition into college life. Freshman year is such a challenging time."

This fall, Johns Hopkins discontinued its covered grades policy, which was intended to ease the transition to college for first-semester freshman by allowing them to take all of their classes on a pass/fail basis. The policy had been in place since 1971. As a result of this change and in anticipation of higher demand, Kelly said, the PILOT Learning program increased its support from 1,250 to 1,800 spots.

Diaconescu is one of many student tutors or peer-leaders that the Office of Academic Support employs part-time, a job that gives them the opportunity to gain valuable communications skills and act as a sort of mentor to younger students.

"One of the most rewarding things I've heard from a student is that I helped make their freshman year easier, or that I explained a concept to them that had been consuming them for the longest time," Diaconescu said. "Or, that I somehow managed to make chemistry fun, something that I never thought would be possible."

Registration for the PILOT Learning program begins on the first day of classes, Jan. 29. The Studying Consulting Program admits students on a rolling basis, and the Learning Den's registration opens three weeks after classes begin.

Students can register on the Office of Academic Support's website, which also offers study aids, information about functional study spaces, and other campus resources for students.