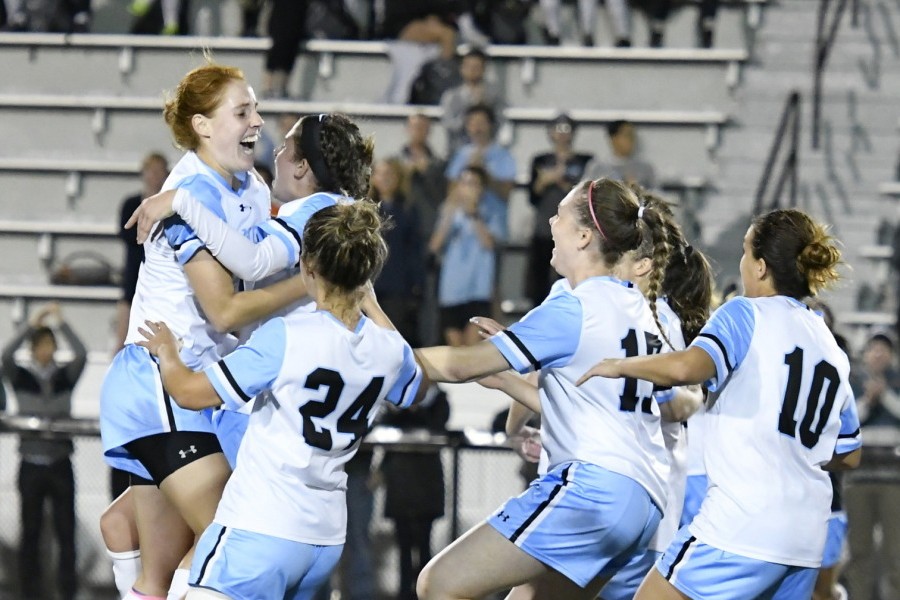 Image caption: Members of the Johns Hopkins women's soccer team celebrate after defeating McDaniel in a penalty kick shootout in the semifinal round of the Centennial Conference tournament at Homewood Field.

Meanwhile, the Hopkins volleyball team, which earned an automatic bid to the DIII tournament by winning its second consecutive conference tournament, learned its postseason destination.

The Johns Hopkins field hockey team was left out of the 24-team DIII field hockey tournament despite posting a 14-5 record and winning the regular-season conference title. Hopkins fell 2-1 to Franklin & Marshall in Sunday's conference final.

Hopkins entered the Centennial Conference tournament over the weekend with a 7-0-2 record against league opponents on the season but was eliminated by Dickinson in the semifinal round in a penalty kick shootout.

JHU's women's soccer team also came out on the losing end of a penalty kick shootout over the weekend, falling to Swarthmore on Sunday evening at Homewood Field. Still, the Blue Jays—owners of a 15-2-3 overall record and a No. 10 national rankings—did more than enough to earn a postseason berth.

Hopkins will host a four-team regional this weekend, beginning with a first-round matchup against Staten Island (13-5-1) at 11 a.m. on Saturday. The winner will advance to take on the winner of a game between Connecticut College (12-3-1) and Wilkes (13-3-3) on Sunday.

JHU is making its 13th consecutive appearance in the tournament and is hosting a regional for the ninth time in the past 10 years.

Hopkins is making its second consecutive and fifth overall appearance in the NCAA tournament. JHU's only loss in its past 24 matches came at Stevenson on Oct. 19.