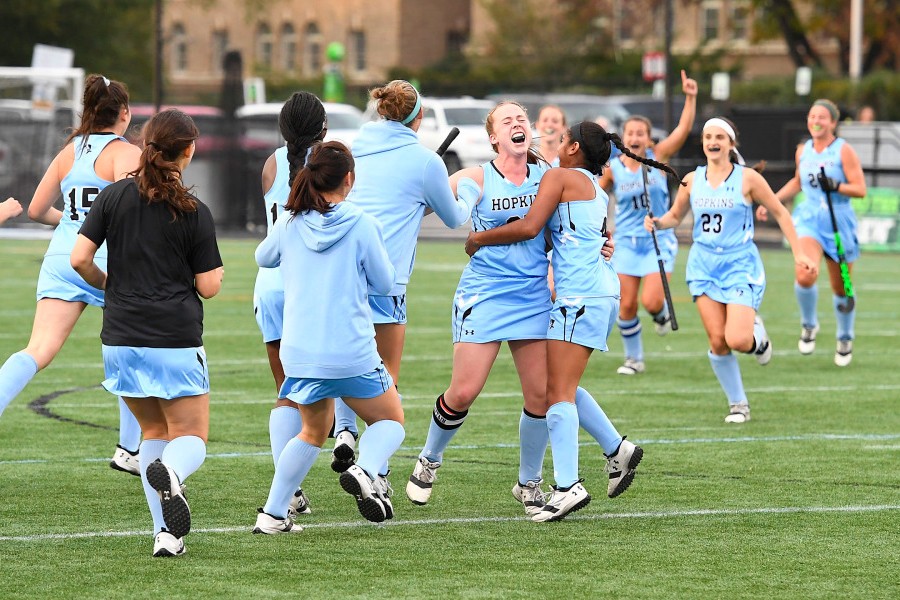 The Johns Hopkins field hockey team scored a pair of goals in the final five minutes Saturday to rally for a 2-1 victory against No. 13 Franklin & Marshall at Homewood Field.

With the win, the Blue Jays (13-4) earned a share of the Centennial Conference's regular-season title and secured the top seed in the upcoming league tournament. Both teams finished with 9-1 conference marks, but Hopkins got the No. 1 seed by virtue of its head-to-head victory.

The Diplomats (13-3) got on the board first on a goal by Annie Horsley with about 17 minutes to play. JHU drew even 10 minutes later when senior Princess Sutherland scored off a pass from senior Morgan Pothast with 4:25 to play.

That set the stage for a dramatic finish. Hopkins earned a corner with 1:08 on the clock, and senior Clare Kavanagh inserted the corner to Sutherland, who fired a shot that was saved by F&M goalie Ilianna Santangelo. But the rebound deflected right to Kavanagh, who slotted it into the cage with 59.2 seconds remaining to put Hopkins on top. Complete box score

Hopkins will host the conference tournament for the first time since 2000 and will face the winner of the first-round game between the No. 4 and No. 5 seeds on Friday. Game times and tournament details will be announced on Monday.