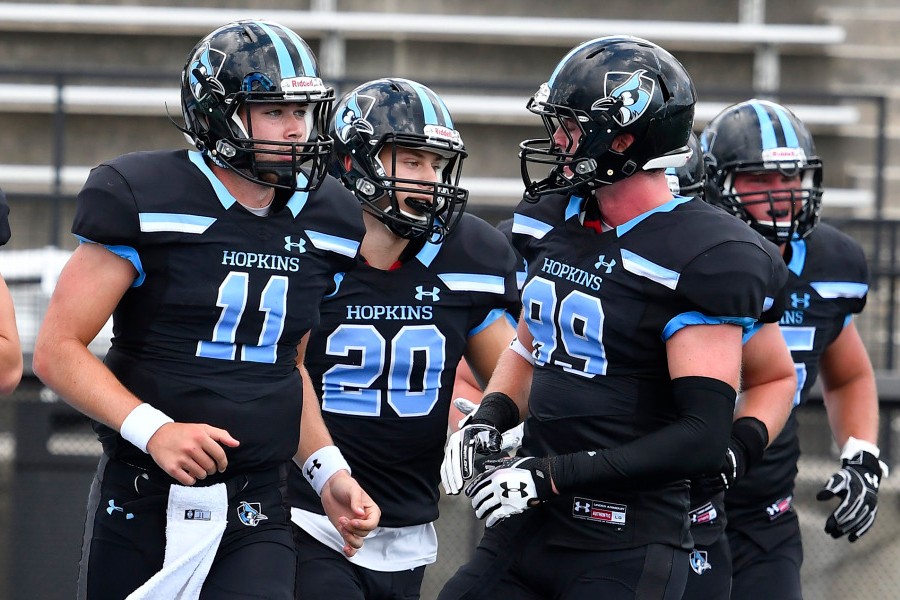 The Johns Hopkins football team turned in a dominant defensive performance against visiting Gettysburg on Friday night, limiting the Bullets to 139 yards of offense and seven first downs in a 52-0 rout at Homewood Field.

The No. 21 Blue Jays (6-1) piled up more than 600 yards of total offense, including 310 yards and four touchdowns on ground. Tyler Messinger ran for two scores, and Nick Leongas and David Tammaro each added a rushing touchdown. Tammaro also threw for 223 yards and two TDs. Complete box score

Hopkins sophomore Patrick Kelly broke the game's biggest play, a 95-yard kickoff return for a touchdown that matched the longest return in school history. Kelly was named Centennial Conference special teams co-player of the week for his efforts.

Mike Kalanik and Ian Lodge paced the Hopkins defense with six tackles apiece; Kalanik was credited with 3.5 tackles for loss.

The shutout was the first for JHU since a 49-0 victory at Dickinson on Oct. 13, 2012. It was the 150th Centennial Conference win for Johns Hopkins coach Jim Margraff.

The Blue Jays head to Muhlenberg on Saturday for a key conference matchup against the Mules (5-2). Kickoff is set for 2 p.m.