A team of biological engineers from the Johns Hopkins Applied Physics Laboratory have discovered a way to store and transport at high temperatures certain types of medicines that would typically require freezing and cold storage. Their proof-of-concept experiment has significant implications for medical access in the developing world.

For the study, published online in the Journal of the Royal Society Interface, the team stabilized and preserved "cell-free" protein expression reagents—living-cell components that contain the cellular machinery to produce new proteins. The preservation method, developed by the study's lead author, David Karig, involves drying the protein expression reagents into a powder in the open air. When these powdered cell extracts are later combined with water and specific DNA types, the mixture creates reactions that produce proteins for therapeutics or vaccines, depending on what type of DNA is used.

Typically, the preserved cell-free protein expression reagents are unstable above freezing temperatures, making cold storage a necessity, which in turn makes this kind of treatment unsustainable in developing countries and remote parts of the world. In disaster scenarios, this preservation method could facilitate fast distribution and production of important field vaccines.

"Our method allows protein expression systems to withstand months of heat stress under atmospheric conditions," Karig said. "The resulting ability to efficiently produce proteins with reagents that can be easily stored and distributed under harsh conditions overcomes many of the challenges associated with implementation of novel therapeutics in remote areas."

To demonstrate the application potential of their findings, the researchers mixed DNA with the powdered cell extracts to create a reaction that produced pyocin proteins. These proteins combat Pseudomonas aeruginosa, a common antibiotic-resistant pathogen that can cause pneumonia, urinary tract infections, soft tissue infections, and sepsis. The powdered cell extracts were 136 days old and had been stored at 97.5 degrees Fahrenheit (typical body temperature). According to their findings, the researchers were able to produce enough pyocin proteins from the powdered cell extracts and DNA mixture to achieve a 100-fold reduction in the P. aeruginosa survival fraction.

"The pyocin production system provides an effective first-line treatment to prevent wound infections in combat environments or other remote locations where transport of lab-produced therapeutics would be infeasible," Karig said. "As the end of the age of antibiotics draws near, fieldable platforms like the one we present will be a necessary next step for low-cost storage, delivery, and production of novel medicines." 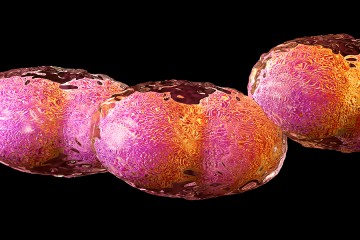