Red quilt squares with stories of rape and abuse survivors lie on The Beach at Johns Hopkins University on Wednesday as part of a visual display to raise awareness and combat rape culture.

It was the second time in three years that the traveling Monument Quilt—started by a survivor-led and -funded artist collective called FORCE—came to the Homewood campus in partnership with CHEW and the Sexual Assault Resource Unit.

"It's so important to have this ability and to have witnesses for survivors and their stories," said Alyse Campbell, sexual assault prevention, education, and response coordinator at JHU. "Very often you have people who've experienced a trauma, and they're expected to not talk about it, or if they do talk about it, they may not be believed, or they might be held responsible for it." 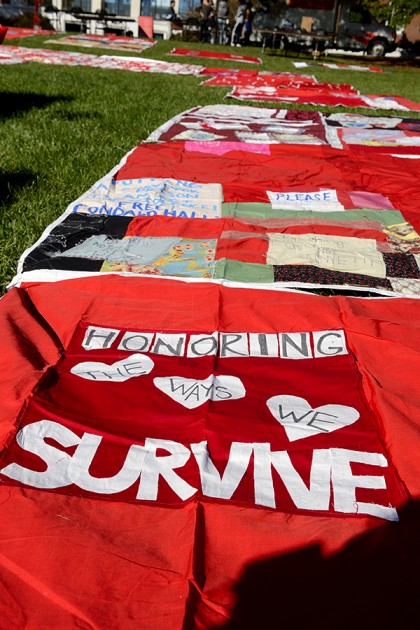 Students walked around The Beach reading stories of abuse and affirmations of hope and support. They were also able to contribute to the quilt, which now has more than 2,500 squares.

Campus offices—including LGBTQ Life, Women & Gender Recourses, the Health and Wellness Center, and PEEPS—tabled during the event to provide resources or relaxing activities for students. Hotline-trained members of SARU talked to students and provided them with counsel in case any of the quilt squares were triggering or traumatic.

"We are bringing the conversation around campus sexual assault directly to a public space, where we can have a space for public healing," said Danielle Pitkoff, a Johns Hopkins senior and co-director of SARU. "And also, it goes with our mission to dismantle rape culture on campus."

Inspired by the AIDS Quilt, the Monument Quilt began in 2013 with a Kickstarter campaign and an idea for people to meet on the National Mall and talk over blankets that displayed stories of survivors. Since then, it has expanded immensely.

"People connected with the idea of 'I can put my story on this quilt square or put a message of support and be a part of a narrative that is about exploding the myth that there is only one kind of survivor,'" said Saida Agostini, chief operating officer for FORCE.

Many campus entities donated to the fund that allowed the Monument Quilt to come to campus, including Student Government Association, the Counseling Center, LGBTQ Life, the Office of the Dean of Student Life, Women and Gender Resources, and the Interfaith Center.

"I want to do the sort of prevention and education part of my job so well … that the advocacy piece of my job is less and less necessary," Campbell said. "And the way to do that is culture change. And part of doing that is being very visible." 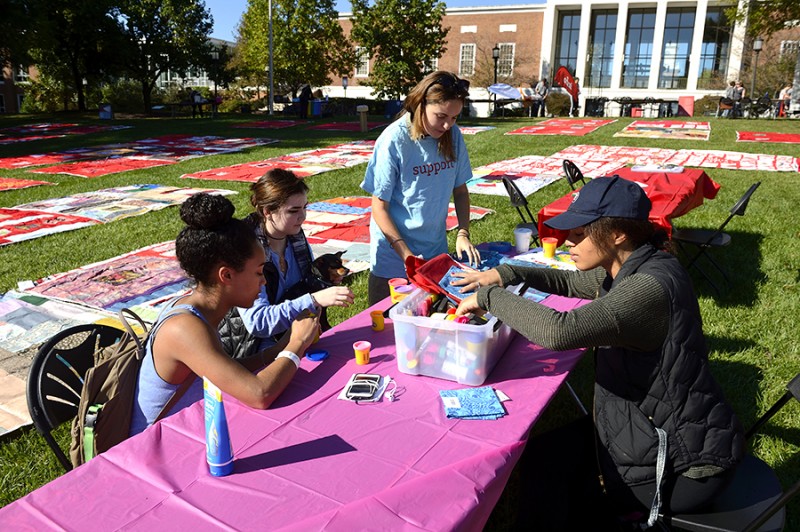