Oscar, Cristian, Luis, and Lorenzo were never expected to amount to much. Born in Mexico and growing up in Arizona, the four undocumented teenagers were poor and attending an underfunded high school in the desert. 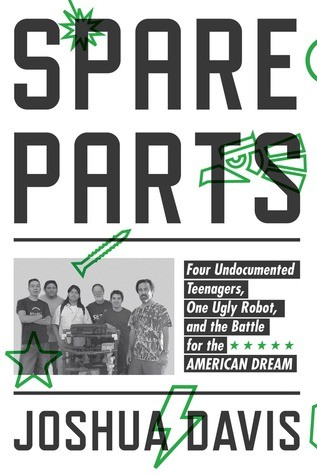 Though the students had never seen the ocean, two science teachers inspired them to build an underwater robot and compete in a marine robotics competition at the University of California, Santa Barbara.

Spare Parts: Four Undocumented Teenagers, One Ugly Robot, and the Battle for the American Dream tells the stories of young men with insurmountable odds stacked against them—deportation, prejudice, and a robotics team with 10 times more funding.

The book by Joshua Davis addresses the issue of immigration and challenges students to consider alternate ways of learning, said Tiffany Sanchez, Johns Hopkins University's interim dean of student life. That's why the Common Read Committee chose it as this year's assignment for the Class of 2021.

New students will discuss the book in small groups led by faculty, staff, resident assistants, and first-year mentors today as part of orientation.

"We hope this makes Hopkins feel a bit more like home and introduces new students to people and ideas that they might not normally come in contact with," Sanchez said.

"We hope this makes Hopkins feel a bit more like home and introduces new students to people and ideas that they might not normally come in contact with."
Tiffany Sanchez
Interim dean of student life

The Common Read program is sponsored by the Parents Fund and started in 2007 with a mission to bring together first-year class members and new transfer students, while encouraging critical thinking and intellectual discussion. Each year a committee made up of JHU staff and faculty chooses a book that students receive via mail.

Over the summer, students had the opportunity to submit essays or short videos in response to the book, and this year there were more than 70 contest entries. Winners will be honored at the Common Read Keynote on Sept. 7, where protagonists Fredi Lajvardi and Oscar Vazquez will talk about their experiences depicted in the novel.

"It's such a great way to get to know our new students, and I enjoy learning about their lives," Sanchez said. "Each response reminded me that there are over 1,300 new individuals in our community and each of them comes with their own experiences, values, and ideas about the world."

One of three winners is Kelechi Nwankwoala, an incoming Writing Seminars and molecular cell biology double-major. In his contest submission, Nwankwoala said he considered his parents' immigration to America and his own fears of being treated differently because of his race as part of his response to the book.

"I tried to use narrative to express how racial prejudice and fear can become a constant weight on the psyche," he said. "It is my belief that constant fear does something to people; it affects the way you interact with the world. I wanted to illustrate how my own fears have changed over the years and how I have become more and more aware of the weight I shoulder."