The university's Milton S. Eisenhower Library sponsored a solar eclipse viewing party, complete with NASA-approved viewing glasses and materials for those who brought their own boxes to make pinhole viewers.

In 14 states across the U.S.—from Lincoln Beach, Oregon, to Charleston, South Carolina—the moon passed directly between the earth and the sun Monday. In this swath, called the path of totality, the moon completely blocked the sun for a period of up to two minutes and 40 seconds. An estimated 7 million people were expected to travel to these states to view the total solar eclipse, the first of its kind since 1970.

Although Baltimore fell outside the path of totality, a substantial portion of the sun was blocked here, too—as much as 80 percent at peak viewing time of 2:43 p.m. Despite some uncooperative clouds and even a few raindrops earlier in the day, patient partygoers eventually were rewarded with some clear views of the fleeting phenomenon. 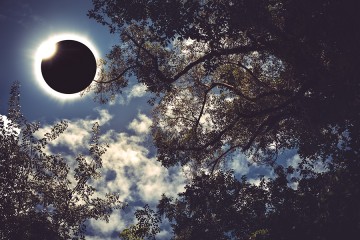 How to watch the eclipse