Review: Cholera vaccines effective for adults, much less so for children

Findings indicate that one dose, spread out over twice as many people, may be more effective at treating outbreaks than traditional two-dose method 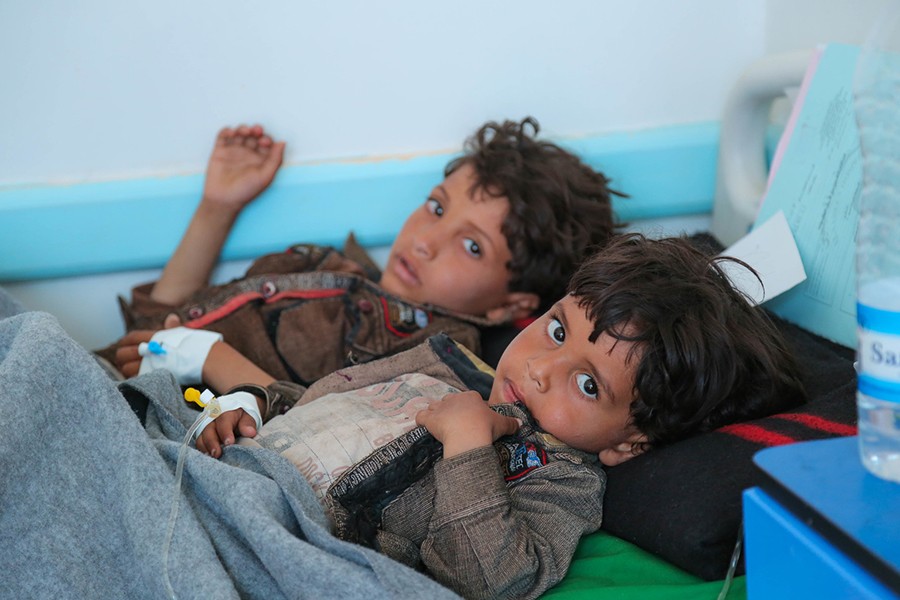 Image caption: On May 12, 2017, at the Sab'een Hospital in Sana'a, Yemen, patients suffering from severe diarrhea or cholera receive treatment.

Children are at particular risk of dying from cholera, and yet a new review conducted by researchers at the Johns Hopkins Bloomberg School of Public Health shows that cholera vaccines provide less protection for children under age 5 than they do for adults.

The findings could help inform policymakers on how and when to use the vaccine, particularly in outbreak settings such as the ongoing epidemic in Yemen, which has seen an estimated 400,000 suspected cases and as many as 1,900 associated deaths since the outbreak began in April. Results of the review appear online in the journal The Lancet Infectious Diseases.

Cholera outbreaks and endemic transmission tend to occur in areas with poor sanitation and a lack of clean drinking water. It affects an estimated 3 million to 5 million people each year worldwide and causes 28,000 to 130,000 deaths annually. Oral vaccines for cholera, which are composed of killed, whole cells of the bacteria Vibrio cholerae, were developed in the 1980s. Yet for years, these vaccines have not been widely available, have been fairly expensive for broad public health use, or have been associated with a number of misconceptions, explains study leader Andrew Azman, a research associate in the Department of Epidemiology.

Studies, too, have suggested a wide range of evaluations about these vaccines, with some results suggesting that the risk of cholera is cut in half with the vaccine and others suggesting that risk is nearly eliminated.

"There continues to be a lot of misinformation on what this vaccine is and what it can do," Azman says. 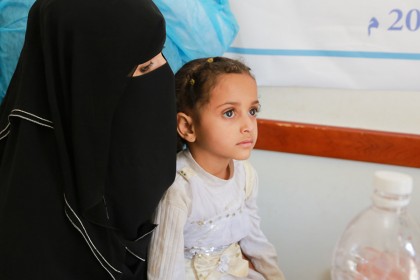 Image caption: Reham, age 10, has acute watery diarrhea and is suspected of having cholera. She is being treated with oral rehydration solution at the Alsonainah Health Centre in Sana’a, Yemen in July of this year.

To help understand discrepancies in study results and to determine a definitive understanding of the efficacy of these vaccines, Azman and his colleagues from the Global Task Force on Cholera Control did a literature review and meta-analysis of seven trials and six observational studies, each of which involved the three major commercial vaccines currently in use. Combined, the trials and studies involved more than 500,000 participants.

Taking an average of these results, the researchers found that for a standard two-dose regimen, efficacy was 58 percent—a measure of how well the vaccine protects in ideal situations, such as a clinical study—and effectiveness was 76 percent—a measure of how well they work in less-ideal situations, such as in the midst of an outbreak. However, for children younger than 5, efficacy was substantially lower: around 30 percent. One dose of these vaccines appeared to provide similar protection as a two-dose regimen, at least within the six months following vaccination. There were no data to examine long-term protection of a one-dose regimen.

The review helps explain discrepancies in past studies that examined how well these vaccines work, say the authors. For example, efficacy for cholera vaccines tends to be lower than effectiveness, a scenario that's opposite from that of most other vaccines and one that has puzzled researchers. However, Azman explains, because efficacy studies tend be conducted in places where cholera is more common in young children—a population in which these vaccines aren't as effective—that may explain why efficacy is lower than effectiveness.

The findings should have enormous implications for vaccine policy, he adds.

Using a one-dose regimen instead of two in areas experiencing high cholera transmission could help spread the vaccine supply to cover twice the number of people. A million doses of the vaccine had been scheduled for delivery to Yemen—what would have been the largest ever global delivery of the cholera vaccine—but the government decided to cancel the campaign, citing logistical challenges and concerns that the limited vaccine coming late in the epidemic would do little to curb the epidemic. A one-dose approach delivered to twice as many people may have been a more effective way to control the outbreak than providing two doses to half the people.

"In cholera-prone areas, public health decision-makers don't always have the luxury of caring about the outbreak risk in two years," Azman says. "They care about the risk of transmission tomorrow or in two weeks or next month. Being able to vaccinate twice the number of people with a limited quantity of vaccine can be very important."