For young people in Baltimore who are exposed to violence regularly, violent behavior can become a conditioned response to stressful situations. But for many, it's a response that's not fully intentional. 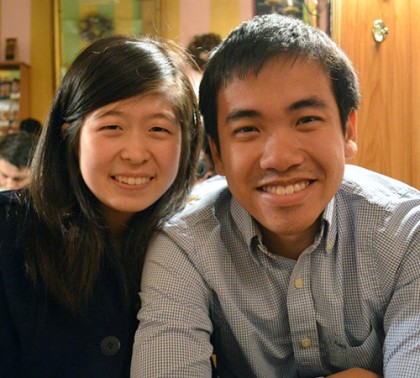 A husband and wife team of researchers, George and Stephanie Zuo, have proposed a way to address these automatic responses in Baltimore youth through cognitive behavioral therapy, a technique already proven effective in schools and juvenile detention centers in Chicago. Their proposal aims to give young people in city schools and detention centers the tools to develop situational awareness and internalize new, healthier patterns of thinking and responding in stressful situations.

The idea has earned Stephanie, who graduated from the Johns Hopkins University School of Medicine in May, and George, who completed his first year as a doctoral student in economics at the University of Maryland, College Park, the 2017 Abell Award for Urban Policy, which recognizes outstanding papers that analyze a major policy issue facing Baltimore and propose feasible solutions.

The honor is accompanied by a $5,000 award. Students with ties to Johns Hopkins University have won the Abell Award 13 times since 2003.

"We wanted to work together, because we thought it would be an amazing way to use both of our skill sets to do something for Baltimore," says Stephanie, who is currently an OB/GYN resident at the Albert Einstein College of Medicine/Montefiore Medical Center in New York City.

The pair met as undergrads at Harvard University, married in 2014, and moved to Baltimore to attend graduate school.

"We're both very much invested in urban, under-served neighborhoods and finding ways to improve the lives of those who live there," she says.

The crux of their proposal, says George, is correcting a common misconception about human behavior—that all people, teenagers included, think ahead and consider consequences when they act, and that they will be deterred from violent behaviors by harsh consequences.

"We know from the wealth of literature and research on the matter this isn't actually the case," he says. "Most of the time, your brain is in this autopilot mode that has evolved over time to efficiently handle everyday life. You actually spend very little of your time actively and consciously making decisions. For kids who come from turbulent backgrounds, this autopilot mode can be useful for navigating through a tough environment at home but can also be problematic in certain contexts, like being called out by a teacher or fellow student. The CBT intervention we propose is an immersive way to help youth shift towards more deliberate thinking, especially in the heat of the moment."

To develop their proposal—titled "Juvenile Crime and the Heat of the Moment: A proposal to pilot cognitive behavioral therapy interventions to reduce youth crime and recidivism in Baltimore City"—they examined research from two programs in Chicago that implemented the CBT therapy, which applies mindfulness techniques to help people identify and correct automatic responses, thoughts, and behaviors. Among the teens who received the therapy, total arrests decreased by 28 to 35 percent, and violent crime arrests decreased by 45 to 50 percent. Graduation rates increased as well at the end of the academic year.

They also analyzed violent crime in Baltimore, finding that the city has one of the highest rates of violent crime per capita among cities of comparable size. They looked at programs and trends in the amount of money spent on youth in the juvenile justice system and found that Baltimore already far outspends the daily national average on educational and mental health services for each child in a juvenile detention facility.

"Clearly," they state in their paper, "financial resources alone have not been enough to stem this problem."

They interviewed high school students, educators, and correctional workers to learn about the needs of high-risk youth in Baltimore.

"I found it incredibly moving to be able to talk to the local stakeholders in Baltimore," Stephanie says. "I really commend them for their hard work—the teachers in the Baltimore City Public School system, the staff at the Baltimore City Juvenile Detention Center, and those involved with nonprofits serving Baltimore youth. It was inspirational to listen to their stories and to hear their passion for caring for these young people."

Adds George: "We have research interests that we're passionate about, but seeing the human interest in it gave a different dimension to our work."

The duo is currently working to connect with Baltimore City officials, youth organizations, and corrections facilities to help implement and administer a pilot program.

"A project at this scale—it's ambitious," George says. "But if we get the right people at the table, I think it's definitely possible."