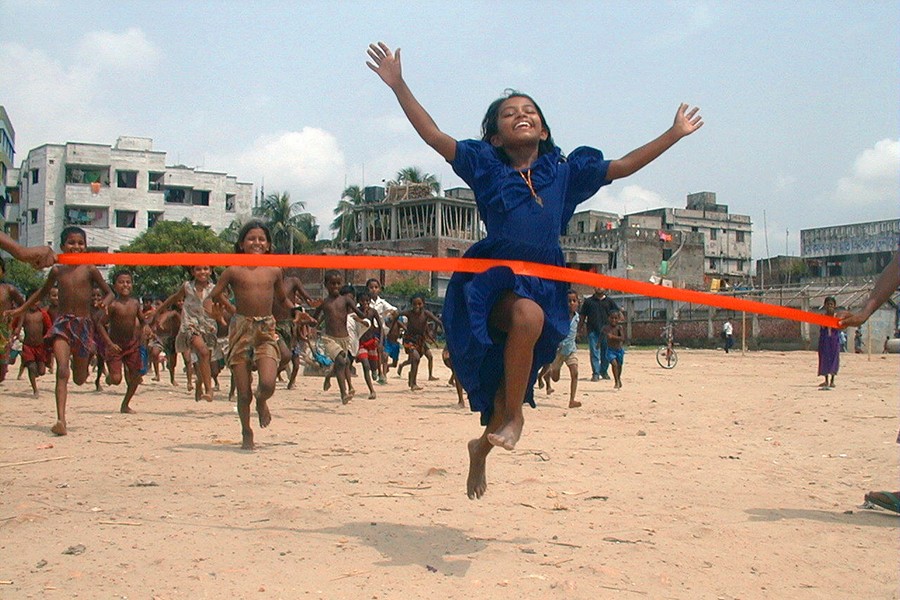 Image caption: Reshma Akhter, an 8-year-old from the Rayerbazar slums of Dhaka, Bangladesh, breaks through the ribbon during a race. She is one of 150 students attending the Gana Unnayan Pathshala School established by Hunger Project volunteers in July 2003.

The Johns Hopkins Center for Communication Programs has received a five-year award with a $300 million ceiling from the United States Agency for International Development to lead its social and behavior change programs around the world.

Breakthrough-ACTION will use evidence-based tools to encourage people in developing countries to adopt healthy behaviors, from using modern contraceptive methods to sleeping under bed nets to being tested for HIV.

"People are now appreciating that you need to do more than just build a health clinic and expect people to come. You have to motivate them, give them a reason to go."
Susan Krenn
Executive director, CCP

Much of the work will harness the power of communication—from mass media campaigns to TV and radio dramas to simple posters in a health clinic—to inspire long-lasting change. It will be led by CCP, which is based at the Johns Hopkins Bloomberg School of Public Health.

"American security is advanced by supporting social and behavioral interventions, which improve health and promote social stability for people living in low- and middle-income countries," says Michael J. Klag, dean of the Bloomberg School. "Such evidence-based, innovative, and creative interventions should be part and parcel of every international health development program. This new award emphasizes the value of investing in social and behavior change programs."

The program builds on a prior five-year, $144 million, 31-country project called the Health Communications Capacity Collaborative, or HC3, and is expected to be double the size.

CCP will partner with:

Breakthrough-ACTION will also be supported in the field by ActionSprout, the International Center for Research on Women, and Human Network International.

"Harmful social norms and behavioral challenges stand in the way of better health, education, and livelihood for far too many people around the globe," says Susan Krenn, CCP's executive director. "With this investment, we have an incredible opportunity to test and scale new approaches, increase efficiency, and to serve more people. We can't wait to get started."

The Breakthrough-ACTION agreement was effective July 21, with work expected to begin immediately. While the exact geographic scope of the project has not yet been finalized, CCP expects to work in dozens of countries, primarily in Africa and Asia. CCP will build on previous successes in some countries and establish new partnerships in others.

While communication is at the heart of Breakthrough-ACTION, the project will also use other behavioral science approaches such as human-centered design and behavioral economics to create social and behavior change at the global, regional, and country level. CCP will use the expertise it gained during the recent West African Ebola outbreak to do similar emergency response work if needed.

Krenn says the award reflects new understandings about what works in international development.

"People are now appreciating that you need to do more than just build a health clinic and expect people to come," she says. "You have to motivate them, give them a reason to go. People need the information to make decisions for themselves and their families, especially when you're asking them to do something that isn't common practice such as sleeping under bed nets or accessing modern contraception. This kind of work provides the missing link, helping to motivate people to make better health decisions."

David Holtgrave, professor and chair of the Bloomberg School's Department of Health, Behavior and Society, says the work of CCP shows the vital role behavior change can play in saving lives.

"Too often, when people think of development, they think only of food aid or drugs for health clinics and the like," he says. "What our work proves is that communication is an essential part of any comprehensive, effective development program."