Aaron Laciny, 20, was 'fantastic to work with,' and 'extremely inquisitive and self-motivated,' his School of Engineering mentor says 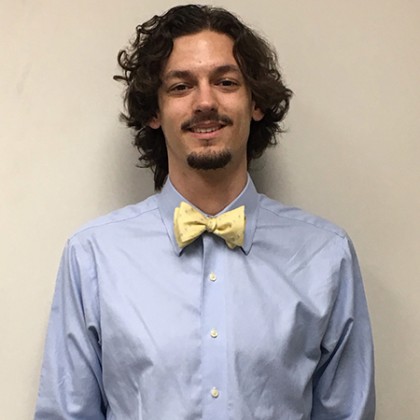 "He was fantastic to work with. He was extremely inquisitive and self-motivated," Assistant Professor Susanna Thon said Tuesday of Aaron Laciny, 20, who had been working in her Whiting School of Engineering lab. "He was one of the best undergrads I've ever mentored."

Laciny, a recent graduate of Baltimore City Community College, joined Thon's NanoEnergy Laboratory last month as part of the Johns Hopkins Laboratory for Computational Sensing and Robotics' Research Experience for Undergraduates program. He was working on a project to design and build new materials for inexpensive solar cells and optical sensors.

Laciny, an avid bicyclist, was riding south on Charles Street, not far north of the city line, around 10:30 p.m. Monday, Baltimore County police said. He was struck by a hit-and-run motorist.

He was then hit by a second car that came upon the scene in the dark; the driver of the second car stopped and called for help. Laciny died at nearby Greater Baltimore Medical Center, police said.

Laciny had earned an associate's degree at BCCC, where he received an award for research on the medicinal properties of henna. He also analyzed data on lead levels in the contaminated water system in Flint, Michigan, and participated in cancer research, according to a BCCC news release.

A friend told The Baltimore Sun that fellow students at BCCC jokingly called Laciny "Bill Nye" because of his passion for science. Laciny "wanted to do research that would make the world a better place," friend Questdrion Threat told the newspaper, adding that Laciny once pulled out dry erase markers to work on equations on the windows of a hotel where they were staying.

All this in a two-year BCCC career that started with a remedial math course.

"I had no idea what I was doing when I first came to BCCC," Laciny said in the college's news release. "I enrolled in a science concentration and changed majors two or three times. Then I met mathematics professor Marianna Gleger. If there's anyone who can make 'community college' a prestigious title, it's Professor Gleger."

The science bug had clearly bitten him, Thon said, and while working this summer at Johns Hopkins he was applying to four-year schools to continue his education.

"He had a very promising career ahead of him," she said. He had also very quickly integrated himself into her lab group, which included five graduate students and three other undergrads. An enthusiastic outdoorsman who swam, ran, and hiked in addition to biking, he had volunteered to plan a local hike for the entire lab.

"He loved the outdoors and wanted to take us all out on a hike," Thon said. The news Tuesday morning of his death was shocking and deeply sad, she said. "It was horrible for all of us."