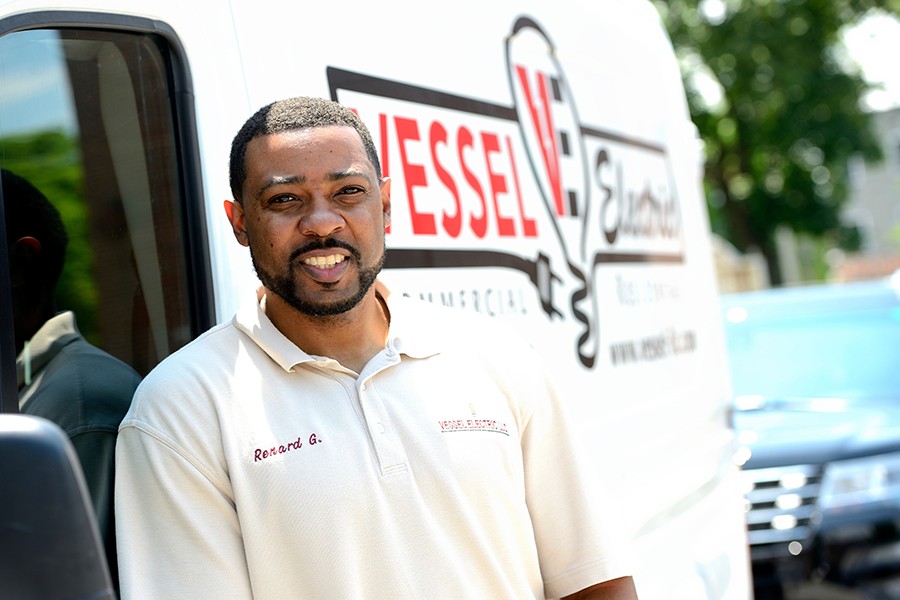 When Renard Gardner started his business, he was a newly minted master electrician with a truck, a ladder, and a whole lot of ambition.

"At that point, it was just me. I was doing work for friends and people that I knew," Gardner said. "I knew all about electrical work, but I had to learn the business side."

That was a little over a decade ago. Since then, bit by bit, Gardner has grown his company, Vessel Electric, which now brings in $1.2 million in annual revenue. But the first years were tough.

Gardner worked the graveyard shift at a federal government job so he could pick up electrical work during the day. Smaller jobs led to bigger ones, and eventually, a contract with Baltimore's public housing authority. Gardner quit his government job and hired an additional electrician. By 2015, as his staff continued to grow, he moved operations out of his home and into an office building.

Then the company landed a major contract to do all the electrical work in a high-rise with 200 apartments. Now Gardner, Vessel Electric's CEO, employs nearly a dozen people, between workers in the field and support staff. But he had persistent questions about how to manage—and continue to grow—his business.

"I have a master electrical license, but I don't have an MBA," Gardner said.

During the free 12-week BUILD College program, Gardner and two employees learned from leaders in the local construction industry and picked up pointers on hiring accountants, lining up financing, and managing human resources.

An associate recommended applying for BUILD College, a program designed to help local minority- and women-owned businesses excel. BUILD College is part of BLocal, an initiative spearheaded by Hopkins and 24 partner organizations designed to increase economic opportunities in Baltimore. BLocal was inspired by HopkinsLocal, Johns Hopkins' $69 million pledge to build, hire, and buy locally and to support Baltimore companies owned by women and minorities.

Through the free 12-week program, Gardner and two Vessel Electric employees learned from leaders in the local construction industry. They picked up pointers on hiring accountants, lining up financing, and managing human resources. General contractors even combed over a sample bid submitted by Gardner and his team, offering pointers for future bids.

"The general contractors went through all the pieces with me," he said. "When they explained it all to me, I realized where I'd had problems on bids before." 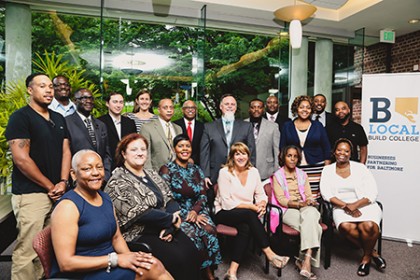 "We want to make sure that we bring as much value to the city of Baltimore as we can," Venters said. "BUILD College started with the intention of giving smaller companies the opportunity to network and focus on business development. We realized that there were limited opportunities for them out there in terms of training, and we wanted to help their business grow."

The program is open to businesses connected to the construction industry, and participants have included owners of design, subcontracting, waste management, and fireproofing companies, Venters said. The program is geared toward established businesses looking to grow; companies must be at least two years old and generate at least $250,000 in annual revenue. Business owners apply for a spot in the program, and no more than 20 are selected for each class.

"We try to keep the classes very intimate. These classes foster discussion," Venters said. "We also want to have a diverse group."

Gardner was one of 17 business leaders to complete the program in May. They were the second crop of graduates of BUILD College; the first cohort finished last fall. Registration begins this month for the third class, which will convene in September.

Kat Sabo, president of Budova Engineering, who also completed the program last month, drew up a list of ways to improve her business based on the class.

"There are a lot of different things that I need to go back and tweak now that I know more about human resources and business development," she said. "Small things can make a huge difference for a small business."

Sabo said she was impressed by the dedication to Baltimore shown by the presenters. It was a "privilege and an honor" to learn from people so committed to strengthening the city, she said.

Sabo has been struggling to make professional contacts in Maryland since relocating from Atlanta two years ago with her husband and business partner. In addition to the practical tips on running a business, she said she appreciated the chance to connect with leaders in the field.

"When you're hearing from someone you hope to work with one day, it means so much more," she said.

Gardner, too, prizes the contacts he made through the class, both his fellow participants and the presenters.

"I've been so focused on running the business, I really haven't focused on the networking portion as much as I should have," he said.

Now, through connections he has made through BUILD College, he's looking to expand his business to work with clinics and hospitals.

"We're a small but growing local company," he said, "and we want to just keep growing."