History, identity, community: At Hopkins, historically black fraternities, sororities give some students a 'sense of home'

JHU is home to four NPHC chapters, the first of which was established in 1976

He stood in Gilman Tunnel reciting information for his approaching performance. Strings of historical facts, names of notable people, mottos, missions, and chants circled his nervous mind. He did not want to mess up or draw a blank in front of the crowd.

Guided by his fraternity brothers, Cameron White began his march from the privacy of the tunnel into the center of Levering Courtyard, where the Sigma Sigma chapter of Alpha Phi Alpha fraternity historically holds its neophyte presentations.

On that day, White joined the ranks of the more than 185,000 men who have been part of the national organization throughout its history, a group that includes the late Martin Luther King Jr.; NAACP founder W.E.B. Du Bois; Baltimore author and Johns Hopkins alum Wes Moore; and even White's grandfather, who joined the fraternity in 1951.

Cloaked in black sweats, a black beret, and sunglasses—a nod to decades-old pledging uniforms—White looked in amazement at the people who had come out to support him. Many of them did not know who would soon be revealed as the newest members of Johns Hopkins University's Alpha Phi Alpha chapter.

When White, a sophomore biomedical engineering major, joined the fraternity, he was hoping to be a part of something bigger than himself. 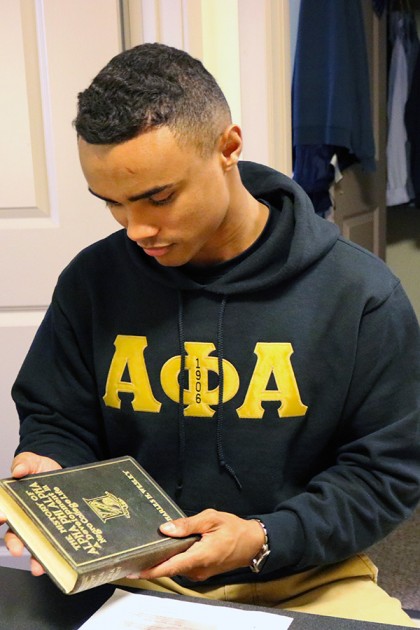 Image caption: Rising junior and member of Alpha Phi Alpha Fraternity, Inc, Cameron White, looks overs a history book about his organization given to him by his grandfather.

"I saw Alpha, coming into this school, as something that was a really good fit for me," he said.

Historically black Greek life at Johns Hopkins may not be as visible or as prominent as it is at historically black universities or other schools with active chapters. But ask members at the fraternities and sororities at JHU, and they will say that they are here, and they are a family.

"These historically black and historically multicultural organizations play a very big role in establishing a sense of home for students here on campus," White said.

The histories of these organizations are much longer than those of the Hopkins chapters. Members learn about these histories while preparing to join their fraternity or sorority, and they often have basic knowledge about their peer organizations as well.

Alpha Phi Alpha—the first intercollegiate Greek-letter fraternity established for African-American men—was founded in 1906 at Cornell University, at a time when blacks faced discrimination from Jim Crow and other laws and ideologies.

For many fraternity and sorority founders, starting a collegiate organization that provided a community for black people was taboo.

The National Pan-Hellenic Council Inc., or NPHC, is the coordinating body for historically black fraternities and sororities. The council, established in 1930, comprises nine organizations, known unofficially as the Divine Nine:

Each of the nine organizations was founded before the passage of the Civil Rights Act of 1964, a period of church bombings, marches, and protests for the rights of black people. While many of the groups were founded at historically black colleges and universities, some were not.

Sigma Gamma Rho, for example, was founded in 1922 at Butler University in Indianapolis.

"One of the defining qualities of Sigma Gamma Rho is that we were founded by seven schoolteachers," said senior Christianne Marguerite, a double-major in global environmental change and sustainability and Africana studies, and president of the Rho Omega chapter at JHU. "One of the first programs that I learned about was Operation Big Book Bag [which donates school supplies to youth in need]. That was something really close to my heart."

Delta Sigma Theta became the first sorority from any Greek council—historically black or otherwise—to establish itself at Hopkins, in 1976.

Isis Dwyer, a senior anthropology and cognitive science major, is president of the Mu Psi chapter, which reactivated at JHU in the fall. Dwyer said her organization, like others in the NPHC, has been part of both historical and more recent efforts to inspire social change.

"I always thought it was amazing that we were a part of the [1913 Women's Suffrage Parade]. That hadn't been a [precedent for] black women," Dwyer said. "That was really powerful because I'm very passionate about activism."

White began his new member presentation with a surge of adrenaline. It was thrilling to finally perform what he had been learning and studying for weeks.

He took off his beret and sunglasses and shouted his name, GPA, major, and class year. For White, this was "the greatest feeling in the world"—he had joined not only Alpha Phi Alpha but also a community of Divine Nine members at Johns Hopkins University.

Members of Divine Nine fraternities and sororities at Johns Hopkins share a sense of pride and community, and they also encounter similar challenges.

Of the 16 undergrads who are currently members of NPHC organizations, half will graduate this month. And it can be difficult to recruit new members from a student population that is about 6 percent black.

"There really are too few of us," Marguerite said. "It's definitely difficult to carry out a lot of the things for this organization that I would like to." 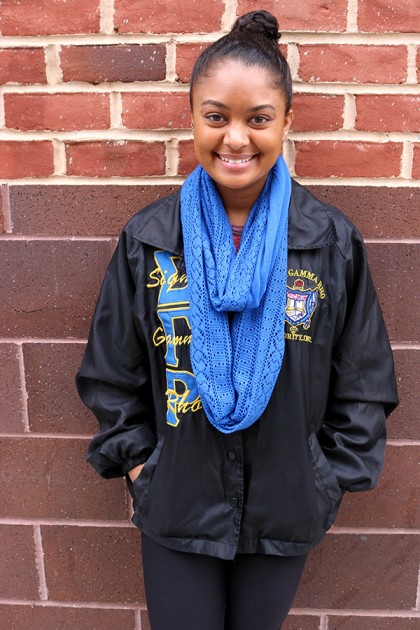 The students face problems with visibility and misconceptions about their fraternities and sororities.

For example, one of the first events Dwyer's chapter hosted after reactivation was "Combat Colorism," a conversation about the prejudice and discrimination of individuals with darker skin tones in the black community.

White also emphasized the important role of service, noting that men in Alpha Phi Alpha are leaders who inspire his chapter's mission to "make a difference at the university and in the Baltimore community," he said.

Since he joined in March 2016, White and his chapter have hosted programs to help students do well in school, teach peers about black history, celebrate women and nonbinary individuals at Johns Hopkins, and encourage frank conversations about campus life.

Members of NPHC sororities at Hopkins say that other Greek students sometimes forget about them. In an orientation event at the beginning of the semester, one recalled, students were asked how many sororities were on JHU's Homewood campus. Some said there were five—in fact there are 12, seven of which are culturally based.

The Intercultural Greek Council, or IGC, was recently established as a regulatory body for JHU's nine culturally based fraternities and sororities, a group that includes NPHC groups as well as multicultural and Latino/a- and Asian-interest groups.

White said that the formation of the council created stronger relationships and opportunities to co-sponsor events within the organizations.

"We always support each other," Marguerite added. "We're all in this for the same thing, for a sense of community, for service. We really hold each other up."

In February, IGC hosted a Back-to-School Block Show on the Homewood campus. Hundreds of JHU community members and students from neighboring universities came to watch step and stroll performances and to learn about each organization.

The Johns Hopkins Office of Fraternity and Sorority Life has implemented meetings with executive members from all Greek councils, event attendance requirements, and a point system to combat many issues.

It's also working to bring more NPHC chapters to campus and helping to raise the profile of existing groups through marketing and promotion. These latter efforts include asking chapters to rethink how they present themselves to the JHU community and how they engage prospective members.

Before he was presented to the community as the newest member of the Sigma Sigma chapter of Alpha Phi Alpha, and before he began the discreet intake process, White made the decision to commit to the fraternity for a lifetime. He looked up to his grandfather—who gave White an Alpha Phi Alpha history book at an early age—and saw a man he aspired to be.

NPHC fraternity and sorority members make a lifetime commitment when they join. Students graduate from college and become members of alumni chapters, where they continue to mentor new members, engage in service, socialize with their Greek brothers and sisters, and attend business conferences. 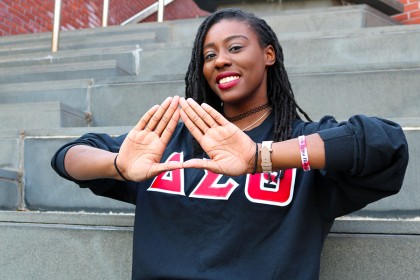 Because of that commitment, prospective members often do their homework before deciding to join a particular organization.

"I did my necessary research to really see what the organization was like as a whole, not just the Hopkins campus, because this really is a lifelong commitment," Brown said. "I really wanted to know what I was getting myself into."

The new member process, also known as intake, is different from rushing other Greek organizations on campus. Instead of receiving bids, prospective members decide which sorority or fraternity they want to be a part of. Students might be asked to attend interviews or to get letters of recommendation from current members, in addition to maintaining discretion throughout the intake process.

Brown added that intake makes members proud about their organization and creates a bond between line sisters or line brothers who are joining at the same time.

"I don't see how that deep-rooted love can come if your organization is something you have settled for," she said.

Though they joined while in college, many students said that they are excited by the lifetime commitment or the prospect of achieving life member status. Dwyer, who joined Delta Sigma Theta during her senior year at Hopkins, said she can't wait to reap the benefits of becoming a "Delta Dear," a senior member of the sorority.

Each student joins a fraternity or sorority for different reasons. Marguerite, who joined Sigma Gamma Rho as a sophomore, said the organization is part of her identity.

Having found that community, White said he is now focused on making it bigger and more visible.

"One of the philosophies I like to adhere to is 'be the change you wish to see,'" he said. "Our cultures are not well-represented at this school. And I want to be a part of the effort that makes a change in that. I want to bring about something to remedy that. And I want to develop other leaders to also help make those changes."