Two faculty members from the Johns Hopkins University have been elected to the National Academy of Sciences, a distinction widely viewed as a mark of excellence in science. 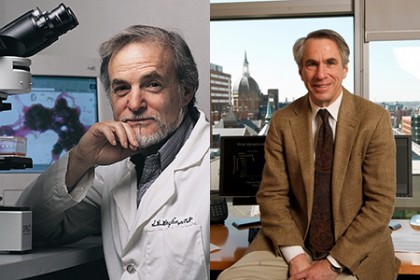 Stephen Baylin and Robert Siliciano are among the 84 new members and 21 foreign associates elected in recognition of their achievements in original research.

Baylin, a professor of oncology at the School of Medicine, joined Johns Hopkins in 1971. He is the associate director for research programs at the Sidney Kimmel Comprehensive Cancer Center at Johns Hopkins and co-director of the center's Cancer Biology Division. His research interests include cell biology and epigenetics—the genetic modifications other than those in DNA that can affect cell behavior.

Baylin's research has examined the mechanisms through which variations in tumor cells develop, and he has studied cell differentiation in cancers such as medullary thyroid carcinoma and small cell lung carcinoma. He was also nominated to the Association of American Physicians last month.

Siliciano, a Johns Hopkins alum, has appointments in the School of Medicine, the Krieger School of Arts and Sciences, and the Howard Hughes Medical Institute. His work has centered on HIV since the virus was identified in the mid-1980s. Siliciano's research identified and explores a major barrier to curing HIV infection: the storage of latent or "resting" virus in certain types of white blood cells. Current drug treatments do not attack HIV in a latent state, so Siliciano's lab works to identify drugs that will activate latent HIV in these cells in order to attack and eliminate the virus in the body—curing infected patients.

Established by Congress and enacted by President Abraham Lincoln in 1863, the National Academy of Sciences provides independent, objective advice to the nation on matters related to science and technology. Membership to the society is considered one of the highest honors a scientist can receive, and new members are nominated and elected by existing members. The induction of the 2017 cohort bring the total NAS membership to 2,250 members and 440 foreign associates.