Undergraduate student leaders from across Homewood campus will be honored Sunday 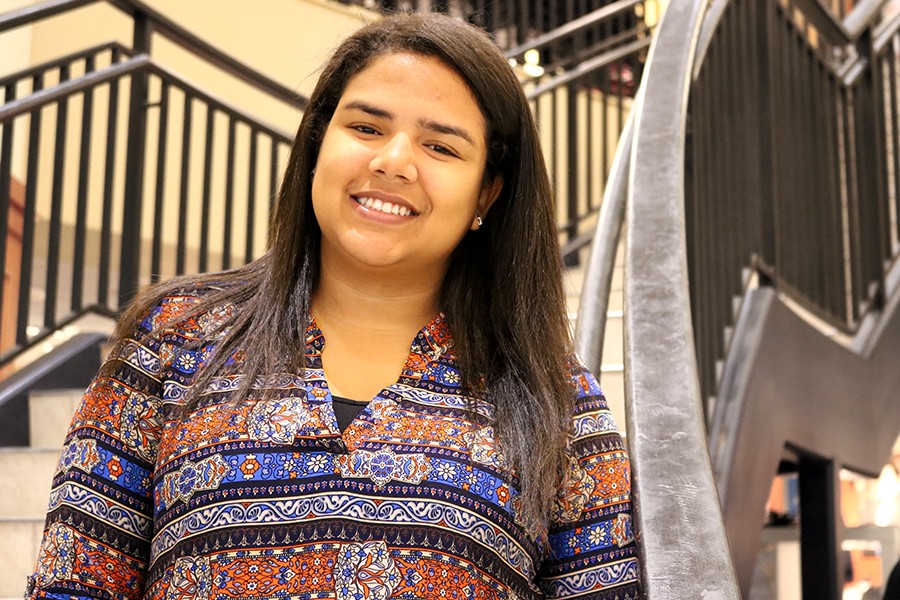 Four years ago, Lucy Delgado participated in a program called Hopkins Overnight Multicultural Experience, or HOME, while she was still a high school student in Queens, New York.

Delgado said her host, Leslie Peralta, was part of her inspiration for ultimately choosing to attend Johns Hopkins University.

"I was really able to see myself here through her," Delgado said. "[She] was someone who I really looked up … and she's also a Dominican woman."

"This award comes as a shock to me. I was not looking to receive awards or expecting."
Lucy Delgado
JHU Class of 2017

The honor is named after a member of the Johns Hopkins University Class of 1914 who was an editor at the News-Letter, a Rhodes Scholar, and a WWI veteran. The cup is awarded each year to a member of the senior class who has served the interests of the university, best exemplifies the ideals of Alexander Barton, and won the respect and affection of peers.

The Barton Cup is considered the highest honor at the Student Leadership Awards, which will be presented on Sunday.

"This award comes as a shock to me," Delgado said. "I was not looking to receive awards or expecting it."

Other awards at Sunday's 3 p.m. event recognize student leaders on behalf of the Office of Multicultural Affairs, the Center for Social Concern, the Student Government Association, the Department of Military Science (ROTC), the Office of the Dean of Student Life, and Student Leadership and Involvement. There are also awards for student organizations and for faculty and staff for their achievements in support of student life.

"Generations of students have been recognized with these awards," said Travis Olson, Johns Hopkins coordinator of leadership development. "Over 100 students have received [the Barton Cup] prize since the award's founding. Keeping these traditions is important because it helps connect students to the institution and calls us to reflect upon how both Hopkins and our understanding of leadership has changed over the past century."

During her four years at JHU, Delgado has studied abroad in Paris and Salvador, Brazil. She is the co-founder and co-facilitator of ROOTS: A Queer, Trans People of Color Discussion Group. When Delgado isn't working toward her international studies and anthropology degrees, she is an intern at the Center for Social Concern and a part-time fundraiser for the university.

Delgado has dedicated her last two summers to serving on the Orientation Core Team, during which she spoke at the convocation for the Class of 2019. She also co-taught a leadership course called Hopkins Leadership Challenge in the fall semesters.

But of all of these accomplishments, Delgado said that starting ROOTS has been her greatest.

"I saw that there was a need for an intersectional space that addresses queer and trans issues for people of color," she said. "It has taught me … how to best facilitate and how to have dialogue around identities. Most of all, it has been uplifting for me and others who attend. It is a space where we can bring our true selves to the table."

After graduation, Delgado will attend graduate school at Colorado State University, where she will pursue a Master's of Science in Higher Education. She said that being a student leader at Johns Hopkins has inspired her to work in student affairs.

"My journey has been kind of tough sometimes at Hopkins. And I think having those people who were supportive, especially the student affairs staff here, really helped me to grow and become that student leader," Delgado said. "I want to do the same for others."