Carl Hart, an expert in behavioral neuroscience, says U.S. is preoccupied with morality of drug use 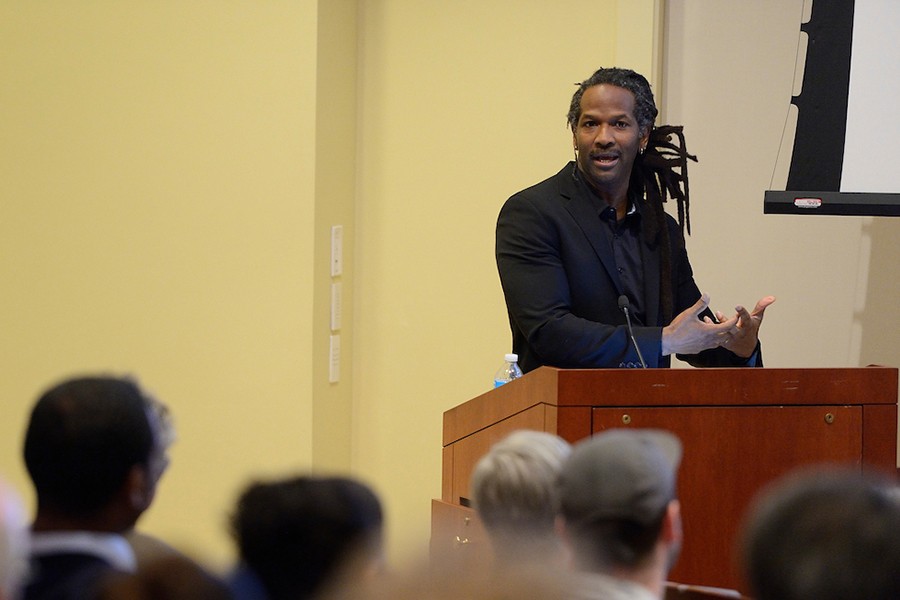 Image caption: Carl Hart, an expert in behavioral neuroscience and neuropsychopharmacology, chairs the Department of Psychology at Columbia University.

Carl Hart says the U.S. should approach drug policy with the understanding that people will always use drugs.

"People have used drugs since we have inhabited the earth," said Hart, chair of the Department of Psychology at Columbia University, Tuesday at Johns Hopkins University. "The notion of a drug-free society is a political statement, and not one that's grounded in reality."

But the country's preoccupation with the morality of drug use hijacks the conversation, and it corrupts policies for treating addiction and preventing overdoses, Hart told the crowd in Mason Hall who came to hear him as part of the JHU Forums on Race in America. It also enables racist drug enforcement policies that disproportionately affect people of color, Hart said.

The country's preoccupation with the morality of drug use ... corrupts policies for treating addiction and preventing overdoses, Hart said. It also enables racist drug enforcement policies that disproportionately affect people of color, he added.

Hart, an expert in behavioral neuroscience and neuropsychopharmacology, said policy problems arise when moral judgments are imposed on the drugs themselves, which are neither good nor bad, but are in fact inert substances. Just look at the famous "Just Say No" speech delivered by Nancy Reagan in 1986, he said, playing a clip from CNN.

"Drugs steal away so much. They take and take," the former first lady said, looking unblinkingly into the camera. "Drugs take away the dream from every child's heart and replace it with a nightmare."

"We need to remove that sort of language," he said. "If we don't, it allows us to vilify not only that drug, but the people that are associated with that drug use."

He dismantled some of the exaggerations made about drugs. For example, the vast majority of people who use drugs don't become addicts, he said.

"They are responsible people, they take care of their families, they pay their taxes. Some of them go to Johns Hopkins University," he said, to light laughter from the audience. "Some of them are invited here to be your distinguished speaker," he added, gesturing to himself.

America is also not in the grips of an opioid epidemic, he said, pointing to data indicating that the number of new users of heroin each year has remained relatively the same since 1980.

Instead, he said, opioid users are overdosing because of adulterants—substances such as fentanyl that are cut into the drug to make it more potent—or because drug users combine opioids with other substances like alcohol or sedatives. To combat these problems, he said scientists could publicize safe practices for opioid use, and communities could set up drug-testing facilities for users to anonymously test their drugs for adulterants.

"They do this all around the world, because their first concern is keeping people safe, and not morality," Hart said.

He said that exaggerations about the harmful effects of drugs serve a nefarious purpose: to justify racist law enforcement practices.

Perhaps there's no greater example of this, said Hart, than the legislation that passed on the heels of the "Just Say No" speech that installed mandatory sentencing practices that disproportionately punished crack cocaine users as compared to powder cocaine users.

"Crack and powder cocaine are the same drug," he said. "People who were caught with small amounts of crack were required to serve a mandatory minimum of five years in prison, and a hundred times more powder cocaine was required for the same penalty. More than 80 percent of the people who were arrested and prosecuted under these laws were black, even though we know that black people didn't use crack cocaine at higher rates than white people in this country."

To keep drug policy in America from being hijacked by morality and exaggeration, Hart encouraged a reframing of the conversation: Drug users should "come out of the closet" to change the narrative that users are inherently abusers.

He also said that creating racial equity in the way drug offenses are prosecuted and sentenced would create more awareness and empathy in society.

"We would see [drug users] as being human, and not only human, but our children," he said. "… When we have compassion, we have a white face. It's unfortunate that in 2017 that's the case, but I do think that would impact people."