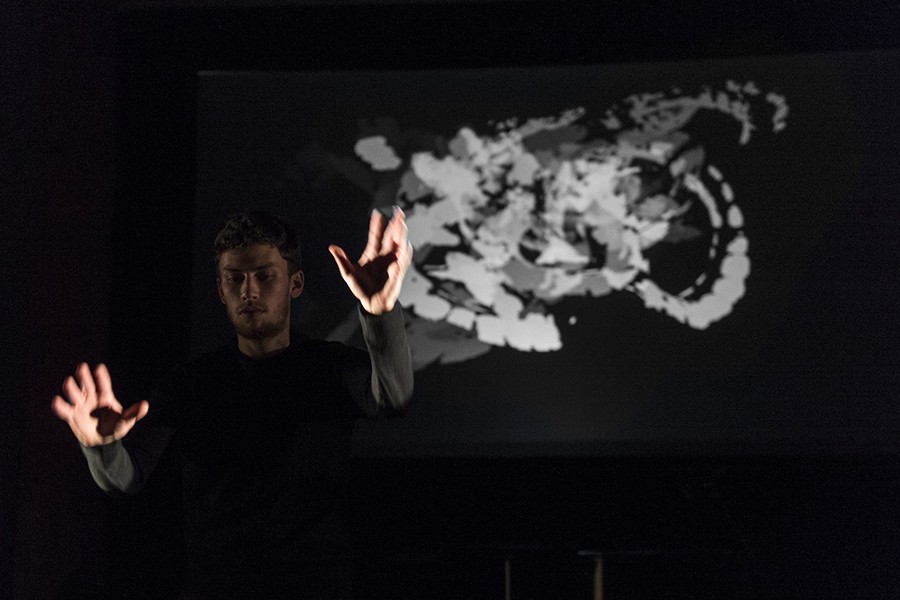 Percussionist and Peabody alum Adam Rosenblatt is going to make music using only his hands. No mallets, no drums, no wood blocks or body or voice—only his hands passing through light.

For the Godly Chaos concert at the Baltimore Theater Project on Thursday and Friday, the program concludes with the East Coast debut of Belgian composer Thierry De Mey's "Light Music," an electronic piece that has only been performed by two people in Europe. During every previous performance, the technician who wrote the software was present to assist the performer. Rosenblatt's performance will be the first time it's staged completely unassisted by a technician from a music research institution.

Fortunately, Rosenblatt has spent considerable time working with and learning from De Mey and the software technician, and was able to develop a method for performing "Light Music" solo during a few artist residencies. Still, the piece requires creating an instrument out of light, with the musician's hands triggering electronically created sounds.

"There's no actual acoustic sound generated," Rosenblatt said, adding that the piece requires a video camera, motion sensors, and "four side lights that create a plane of light about a foot thick in front of the performer."

This wall of light requires a theater space to create total darkness, such that an audience doesn't see the light wall until the performer sticks a hand into it. A computer "sees" the hand and projects an image of it behind the performer—as shown in this video of a performance at the Centre Pompidou in Paris. The speed and movement of the hands influence the projection, creating different visual effects.

During the performance, Rosenblatt will wear motion sensors that feed information into a computer.

"If the camera senses your hand in a certain quadrant of its visual space, it will trigger certain sounds," he said. "Moving quickly triggers a different sound. And it all depends on the section of the piece and what the composer chose, but it's all composed and it's all planned, even the gestures and the choreography." 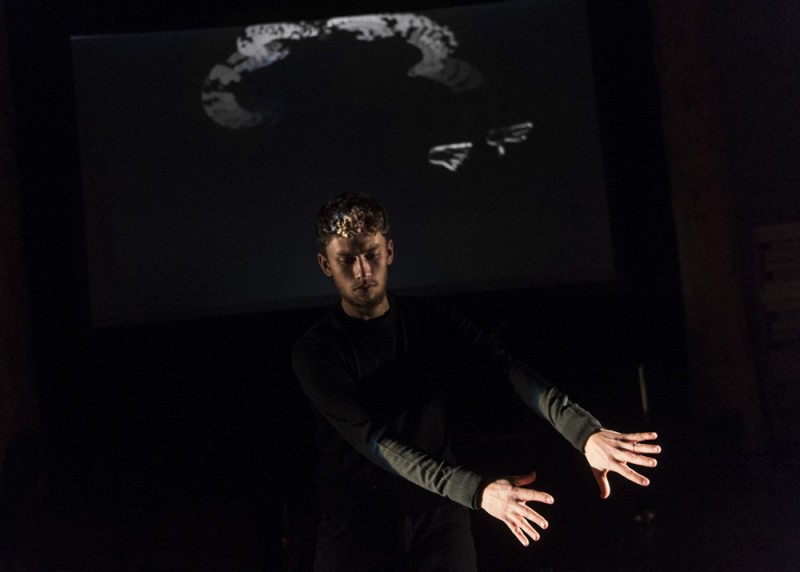 "Light Music" is one of a handful of inventive, unconventional works for percussion that make up Godly Chaos, which includes pieces using only the performer's body and voice, acoustic instrument arrangements, compositions with instruments and electronics, and the entirely technology-mediated "Light Music." The program includes Steve Reich's "Pendulum Music;" French composer François Sarhan's "Imagination" and the intoxicating "Home Work;" Mark Applebaum's "Aphasia;" Alexander Schubert's "Laplace Tiger;" David Lang's "So-called Laws of Nature," movement 3; John Cage's "Radio Music"—which normally calls for between one to eight radios, but which will be performed with audience members' smartphones and the Radio Garden website; and De Mey's "Light Music."

Everything will be performed by the QuaQuaQua percussion trio, co-founded in 2015 by Rosenblatt, his wife Tatevik Khoja-Eynatyan, and Terry Sweeney, who all met as Peabody undergraduates.

"I think percussionists are certainly the most prepared to play with pieces like this because we think so choreographically a lot of the time," he said. "I was also getting into these kinds of heavily gestural pieces that work off some kind of gestural language before this [concert]."

Godly Chaos, its repertoire and structure, is itself a performative approach Rosenblatt has wanted to try out: a thematically linked concert that explores the way Western philosophy has wrestled with the idea of free will in the face of new scientific knowledge.

"I've been interested for a long time in ideas of free will and determinism, especially as we find out more and more about physics and biology," Rosenblatt said. He adds that Schubert's "Laplace Tiger," composed for drum kit and electronics, directly engages French mathematician Pierre-Simon Laplace's early 19th century theories of determinism: that if you know the precise location and momentum of every atom in the universe, classical mechanics allows you to predict those atom's location at any time in the past or future.

A universe based on that theory is "basically just a bunch of billiard balls bouncing off each other," Rosenblatt said. "That's a complete determinist, kind of 19th-century view of the world. Then when quantum theory came along we realized we can't know the position of every particle with certainty. It's a much fuzzier thing. Does that give us enough uncertainty or chaos to say there's free will, that not everything is determined? That's directly what that piece grapples with."

For QuaQuaQua, which debuted at the 2016 New Music Gathering that was held at the Peabody Institute, Godly Chaos is the group's latest experiment with turning concert music into theatrical immersion.

"Thematically [this concert] it's something I've wanted to try and do for a long time, musical concerts that are composed pieces that are performed in a certain order, but with a really strong streak that explores a theme that's extra musical or which the music speaks a little bit about, obliquely or directly," Rosenblatt said. "And in a space that's more theatrical, where it's almost like the pieces are scenes in a play rather than pieces on a concert, where the tension doesn't break between each piece and flows directly one into the next."