Image caption: Johns Hopkins students created the "We Welcome __" in an advertising and marketing class offered through the Whiting School of Engineering's Center for Leadership Education. The group recently hosted a "Thirst for Culture" awareness and education event on The Beach at the university's Homewood campus.

A group of Johns Hopkins University undergraduates is trying to foment a revolution.

Their target? The kind of violent extremist ideology, propaganda, and recruitment that have resulted in harrowing headlines around the globe.

"We believe it's time that people start including others and appreciating all cultures, religions, and individuals."
Jazmin Gelbart
Johns Hopkins junior

Their tools? Instagram, Facebook, Twitter, and a series of on-campus events—all part of a campaign they call "We Welcome __", which aims to spread understanding, kindness, and inclusion.

"Research has shown that individuals who are joining violent extremist groups are those who feel isolated and not included in their surrounding communities," says Amy Boulier, a junior mechanical engineering major. "Our objective is to spread cultural inclusion throughout the Johns Hopkins campus by starting up conversations and educating students about various cultures."

Boulier and 38 of her classmates in an advertising and marketing class offered through the Whiting School of Engineering's Center for Leadership Education created "We Welcome __" as part of the "Peer2Peer: Challenging Extremism Competition," a partnership between the U.S. Department of Homeland Security, Facebook, and EdVenture Partners.

The contest challenges university students around the world to conceive, design, and carry out social and digital media campaigns aimed at countering hate speech. Since the program was created in 2015, student teams from more than 300 universities across the world have taken part, reaching more than 20 million people through social media campaigns, cultural activities, campus movements, videos, and more.

The top three teams will be invited to Washington, D.C., to present their campaigns to representatives from the U.S. Department of Homeland Security's Office for Community Partnerships, as well as other intergovernmental agency leaders, in July. Each winning team also receives $3,000.

The Hopkins team will find out in mid-June if it is one of the three selected. But team members say that winning the official contest is far less important than making an impact with their message of tolerance.

"Most of the world's conflicts have been based on extremism," says Jazmin Gelbart, a junior majoring in applied mathematics and statistics, and a member of Stratejays Marketing, the advertising agency that the students formed to create their campaign. "We believe it's time that people start including others and appreciating all cultures, religions, and individuals." 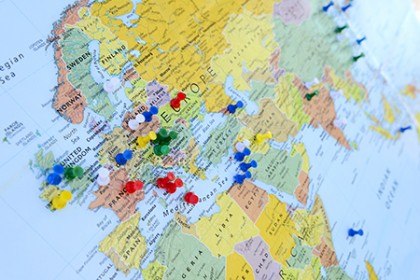 Image caption: The group had students place pins on a map to signify where they are from.

The students launched "We Welcome ___" in late March, when a multicultural tailgate event before the Blue Jays took on the Rutgers Scarlet Knights in men's lacrosse kicked off three weeks of cultural activities, social media contests, and opportunities for students to connect with one another. The goal of all of these events is to foster inclusion by helping students appreciate and open up to differences.

"We're trying to foster real conversations and have the opportunity to change how people feel at Hopkins," says Gabrielle Liflander, a junior major in applied mathematics and statistics.

Leslie Kendrick, the course instructor, says that the campaign results, so far, prove that the students have been effective.

"The campaign has elicited more than 430,000 impressions by the end of its launch week," she says. "In-person campus events have attracted more than 200 students, and 139 have pledged to stand up against violent extremism on the website."

In addition, a class-produced video that launched the campaign has garnered 2,600 views, which Kendrick calls "an all-time high" for any class campaign.

To learn more about "We Welcome __" and how you can get involved, visit the team's website.