In 2011, retired veteran Ron Capps was driving home one night from a class at Johns Hopkins, his mind reeling. He was close to completing the master's in writing program he was taking through his GI benefits, and wondering what he could do with his new education.

A thought came to him: "Give it away." 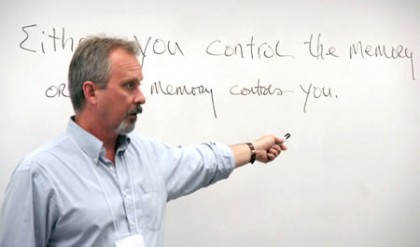 The student-run symposium invited Capps back to his alma mater to receive the Anne Smedinghoff Award for his work on the Veterans Writing Project. The nonprofit born from Capps' brainstorming six years ago has now offered 75 free writing workshops in 18 different states for military veterans, service members, and their family members. It publishes an online and print journal, 0-Dark-Thirty, featuring poetry, fiction, and nonfiction by veteran and active-duty writers.

The project aims to disseminate a new wave of literature coming from military writers, providing a platform for them to share their singular experiences. There's also a therapeutic goal, using the healing power of writing to help contributors process the trauma of warfare.

A team of fellow veterans, most of whom also completed their master's in writing at Johns Hopkins, support Capps in his mission.

Capps himself has since published a book, Seriously Not All Right: Five Wars in Ten Years, telling his own story of post-traumatic stress after the atrocities he witnessed through military and State Department service in Rwanda, Darfur, Kosovo, Eastern Congo, Afghanistan, and Iraq.

At one point in 2006, sitting alone in a pickup truck in the Sudanese desert, Capps said, he was a trigger's pull away from suicide.

"Traditional therapy wasn't working for me. Writing was what worked for me."
Ron Capps
Veterans Writing Project founder

Capps had borrowed a pistol from a sergeant on his team who, he said, had no reason not to trust him with it. Capps was, after all, a senior officer with more than 20 years of field experience. He had become adept at hiding his mental anguish, which he knew posed the risk of stigma, if not loss of his security clearance.

"I had that sergeant fooled," he said. "I had my bosses fooled. I had my family and friends fooled."

A phone call from his wife interrupted Capps that day in the desert. He put down the pistol. The next day, he asked to be sent home.

But his psychological struggles continued, despite medication and psychiatric treatments. When Capps retired in 2008, he enrolled in the writing program at Johns Hopkins, where he had previously earned his master's of liberal arts in 1995.

"Traditional therapy wasn't working for me," he said. "Writing was what worked for me."

Capps shares that approach with others through the Veterans Writing Project, which he runs from his home in the Washington, D.C., suburbs. He teaches weekly at Walter Reed National Military Medical Center in Bethesda, Maryland, and he and his fellow instructors travel the country to conduct writing workshops, which range from two-day seminars to 14-week courses and cover a variety of genres. They work in partnership with universities, veterans centers, arts councils, and other organizations that support the mission.

All of the instructors are veterans themselves, with degrees in writing or journalism. Those include the Johns Hopkins alumni in attendance Wednesday night: Jerri Bell, Dario DiBattista, and Jim Mathews.

Capps emphasized that despite the program's therapeutic benefits, its instructors are not therapists. He has advocated, through, for universities to create a "writing therapy" degree offering, on par with art therapy or dance therapy.

He also has visions of moving the Veterans Writing Project to a headquarters more formal than his spare bedroom.

"The big dream for us is to have a permanent base … where writers could come for residencies, a place where we could host workshops and readings," he said, suggesting an urban area like Baltimore as an ideal spot.

The award Capps received last night honors Anne Smedinghoff, a 2009 Johns Hopkins graduate who died in Afghanistan four years ago this month while working as a U.S. diplomat. Smedinghoff, 25, was killed in a suicide bombing while delivering books to schoolchildren. The award in her name honors individuals and organizations that embody her values of education, development, and global harmony. 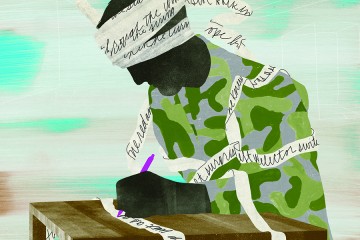 Mightier than the sword