A world free of sexual violence is possible. That was the message Wagatwe Wanjuki, a national campus anti-violence advocate, delivered at a talk Tuesday night that kicked off Sexual Assault Awareness Month at Johns Hopkins University.

The event, titled "Back to basics: Learning the truth about sexual assault and rape culture," aimed to raise awareness about the misconceptions and falsehoods surrounding sexual violence. Wanjuki shared her personal story as a survivor and discussed the lack of support she received from her former university. 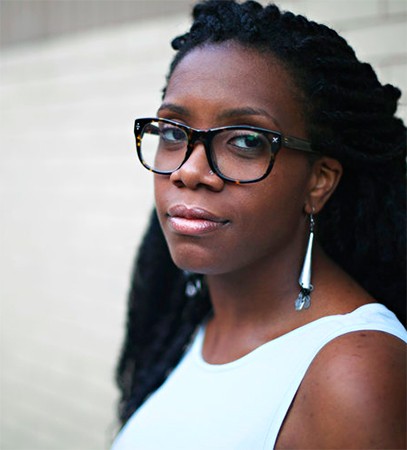 "I don't want what happened to me to happen to anyone else," she said.

Wanjuki outlined ways in which society can end rape culture, an environment or outlook that normalizes and trivializes sexual assault and abuse.

She said that more education about consent and thinking about stopping rape before it happens are both necessary.

Wanjuki also spoke out against victim-blaming and "slut-shaming"—the act of stigmatizing and shaming women for expressing their sexuality—two practices she said work to protect sexual predators.

Events at JHU this month will promote messages similar to Wanjuki's. Sexual Assault Awareness Month is meant to raise awareness about sexual violence, to show support for survivors of sexual violence, and to promote an open dialogue to end rape culture, said Katherine Jones, a sexual assault specialist and staff psychologist in the JHU Counseling Center.

A handful of offices and organizations—including the Johns Hopkins Office of Institutional Equity, the office of Gender Equity, the Sexual Assault Resource Unit (SARU), the counseling center, and the Center for Health Education and Wellness (CHEW)—are working together to sponsor future events.

Next Thursday, the group Men Can Stop Rape will speak at 6 p.m. in AMR I's multipurpose room. Greek Life will co-host an event about consent on April 25, and there will be a talk about relationships in different cultures on April 26. The full list of events is available online.

"We want to get people speaking up, and intervening, and saying that this isn't' OK when they see some of those micro-aggressions or things that can contribute to what can then lead to violence," said Chris Conway, associate director of the counseling center.

The center encourages Johns Hopkins community members to wear teal or a teal ribbon on Tuesdays to demonstrate their support for survivors of sexual violence. Teal Tuesdays is part of a national social activism campaign. Ribbons and pledges were distributed to every campus department on the university's Homewood and East Baltimore campuses.

There will also be tabling events on Tuesdays at which ribbons and information about resources will be available.

Some of these resources include:

Both Wanjuki and counseling center staff said that the fight to end rape requires the participation of an entire community.

"That's the only way we're going to change the culture," Jones said. "[When] people are willing to take risks, and stand up, … be brave, and say something."