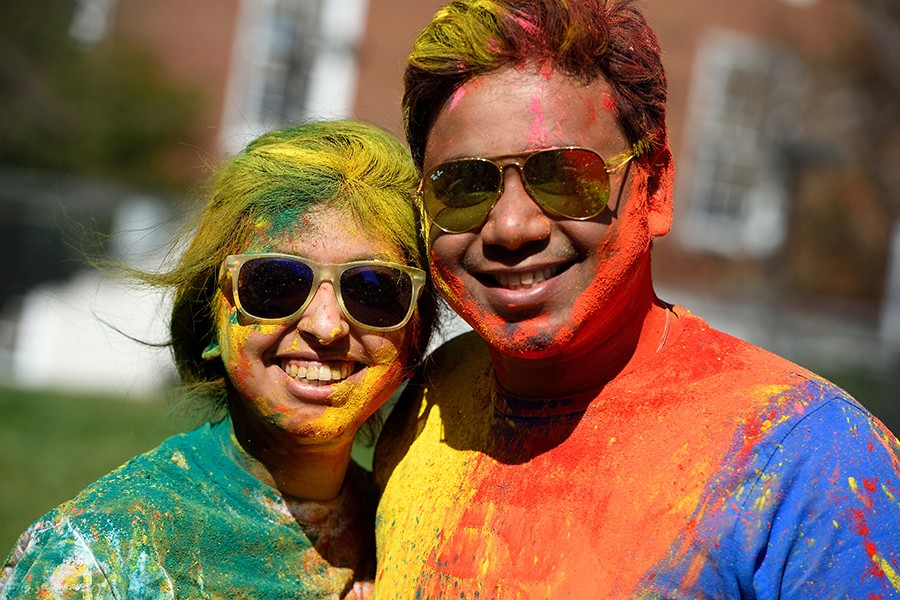 The forecast may have been iffy earlier last week with calls for weekend rain and cold fronts, but by Sunday morning a clear sky and light breeze made for perfect Holi weather.

Hopkins Holi, celebrated sporadically in the past, has been an annual spring event in its current form since 2011. Sponsored by the Johns Hopkins Association for India's Development and the Hindu Students Council, the Homewood campus festival has religious and cultural significance: it ushers in spring at the close of the harvest season, and celebrates the triumph of the Hindu god Vishnu over Holika, the demon goddess who attempted to trick a Vishnu devotee into burning to death on a pyre but was instead consumed by the flames. Traditional Holi festivals are often accompanied by a bonfire night.

Across the Beach, refrains of "Happy Holi" rang out as more than 150 students gathered around tables of dyed powders to load up plates of pigments to smear, sprinkle, and toss at each other. More than 400 pounds of Holi color was used.

Hopkins Holi is similar in spirit to the celebrations that take place in India, says AID's president Nishikant Deshmukh, who recently completed his PhD in the Department of Computer Science. Based on the lunar calendar, Holi was officially celebrated in India this year on March 12-13.

"I was in India during Holi," says Deshmukh. "It's much more intense than what we do here—the colors typically take longer to wash off."

Deshmukh says that in India, it's a neighborhood celebration, and some municipalities collect money from commuters on the road in order to fund the local festival. He says that water is often used in the celebrations, which can be a problem in regions where water is scarce.

He also says it's typical for non-Hindus to celebrate Holi.

"The thing that you find in India is that most of the people who sell colors are from other religions, like Christians or Muslims, and people across the region join in the celebration," he says. "Most of the time, you'll find a slogan like, 'Don't mind, it's Holi.' Even if you are arch-enemies of each other, people play Holi together."

Manish Paranjpe, a junior in biophysics, is the undergraduate leader of AID. Before coming to Hopkins, he hadn't celebrated Holi.

"In college, there's a big community of people who want to make full use of the intercultural environment," he says. "There's so much diversity we have on campus, and it's really encouraging to see that other students want to take part in events like this."

Hopkins Holi organizers treated the festival-goers to a lunch sourced from a local Indian eatery in Towson, and Punjabi, Hindi, Tamil, and Marathi pop music.