Two professors in the Johns Hopkins Mathematics Department are among 40 mathematicians across the country chosen for 2017-2018 fellowships by the Simons Foundation. 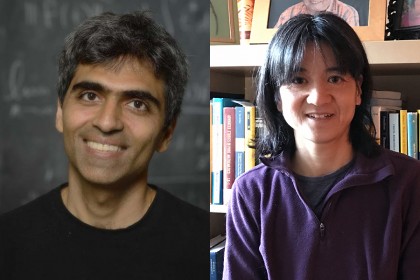 Nitu Kitchloo and Chikako Mese were recognized for scholarly achievement and the potential impact of the work conducted during their fellowship. The Simons Foundation—established in 1994 to promote research in basic science and mathematics—says that the goal of the fellowship program is to make it easier for faculty members to take sabbaticals or to extend their leaves by a half year.

Indeed, both Kitchloo and Mese said they'll be doing just that, stretching their sabbaticals from one to two full semesters starting this fall.

"For years, I have had collaborators throughout Europe and this will be a unique opportunity to interact with them on a sustained basis," said Kitchloo, who said he plans to spend the spring 2018 semester at the Max Planck Institute of Mathematics in Bonn, Germany. "I will get a chance to discuss my thoughts with, and assimilate the latest ideas from some of the brightest minds and for a long and unencumbered duration. Proximity is often the key to creativity in our field."

Kitchloo's research focuses on analyzing complex shapes defined in mathematical, if not physical, terms. While abstract, the work has direct bearing on mathematical physics as a way to analyze the multidimensional continuum that defines our space-time. He has chaired the Department of Mathematics since 2014, and has been a professor at Johns Hopkins since 2010. He also taught at Johns Hopkins as an assistant professor between 2001 and 2004.

Mese said she feels that the Simons award "represents acknowledgments for the hard work that my collaborators, especially my main collaborator Georgios Daskalopoulos of Brown [University], and I have been putting into our projects. I feel good about what we've been able to accomplish and where our work is headed."

She joined Johns Hopkins in 2004, serving as associate professor until 2007, then full professor. She chaired the Department of Mathematics from 2008 to 2011.

The Simons Foundation—established in New York City by hedge fund founder and manager James Harris Simons—has emerged as a significant source of support for research in science and mathematics, especially as federal government research budgets have been flat or diminishing for about ten years, according to an article published last year by Inside Philanthropy. The journal reported that the Simons endowment amounted to more than $2 billion, making it among the top 40 foundations in the United States.

In 2014, Johns Hopkins astrophysicist Marc Kamionkowski won a Simons Foundation Investigator award, providing up to $1 million to support his research in cosmology, focusing on the origins of the universe.