Johns Hopkins researchers have found a link between postpartum depression and reduced levels of the hormone allopregnanolone, which is known for its anti-anxiety effects.

A small-scale study associated lower-than-usual levels of that hormone in the second trimester of pregnancy with higher risks of developing postpartum depression, in a group of women with previously diagnosed mood disorders.

In a report on their findings in Psychoneuroendocrinology, the researchers suggest that allopregnanolone holds potential for marking and treating postpartum depression. Research in the past had established a link between reduced levels of the hormone—a byproduct of the breakdown of progesterone —and anxiety and depressed mood.

The researchers caution that theirs was an observational study in women already diagnosed with a mood disorder and/or taking antidepressants or mood stabilizers, and does not establish cause and effect between the progesterone metabolite and postpartum depression. But it does, they say, add to evidence that hormonal disruptions during pregnancy point to opportunities for intervention.

While previous studies associated the disorder with a vulnerability to pregnancy hormone fluctuations, they didn't identify concrete markers of whether a woman would develop postpartum depression, according to Lauren Osborne, assistant director of the Johns Hopkins Women's Mood Disorders Center and assistant professor of psychiatry and behavioral sciences at the Johns Hopkins School of Medicine.

"For our study, we looked at a high-risk population of women already diagnosed with mood disorders and asked what might be making them more susceptible," Osborne says.

Postpartum depression affects an estimated 15 to 20 percent of American women who give birth, presenting potentially serious consequences if it goes untreated. The infant may suffer from neglect and development setbacks, while the mother be at an increased risk for suicide. Only 15 percent of women with postpartum depression are estimated to ever receive professional treatment, according to the U.S. Centers for Disease Control and Prevention.

The researchers examined 60 pregnant women between age 18 and 45, measuring levels of progesterone and allopregnanolone from blood samples.

However, the researchers saw no link between third trimester levels of allopregnanolone and postpartum depression. They also saw no effect on the depression from progesterone levels in the second and third trimesters.

In the future, Osborne's group hopes to study whether allopregnanolone can be used specifically to prevent the disorder in women at risk. Johns Hopkins is one of several institutions currently participating in a clinical trial led by Sage Therapeutics that's looking at allopregnanolone as a treatment for postpartum depression.

In addition, if the allopregnanolone link holds true for women without mood disorders, then tests for low levels of that hormone in the second trimester could be used a biomarker to predict risks of postpartum depression.

In this study researchers took note of a seeming contradiction: Many women who developed postpartum depression were already using psychiatric medications including antidepressants or mood stabilizers.

Osborne says physicians may be undertreating depression during pregnancy, believing lower doses are safer for the baby. But she noted that ineffective treatment exposes the infant not only to the drugs but to the mother's illness. 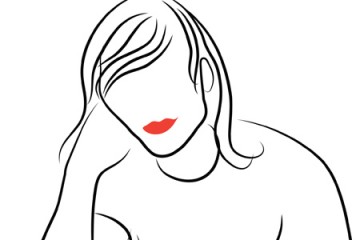