Men's lacrosse: Hopkins fights back but falls in OT against Syracuse 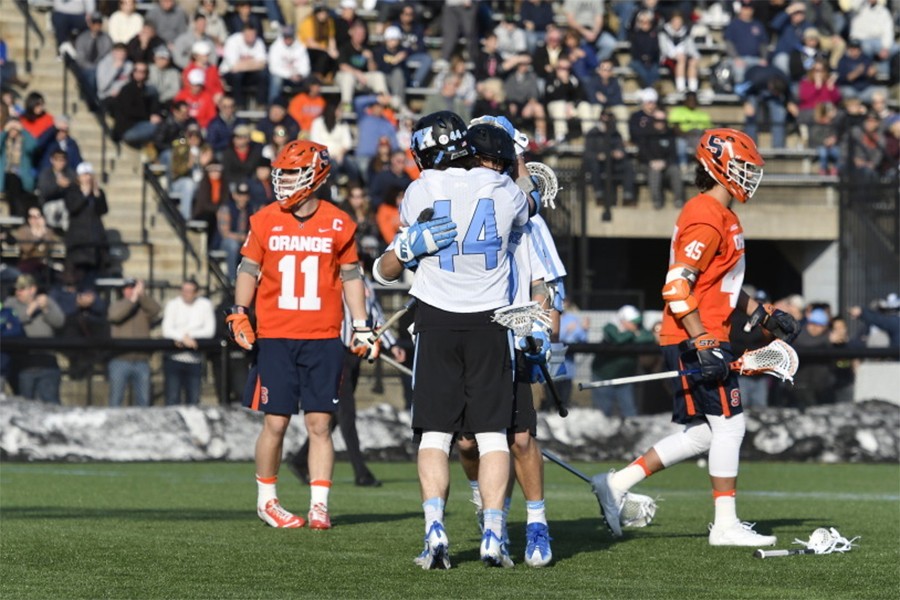 The Johns Hopkins men's lacrosse team rallied from a three-goal second-half deficit to force overtime against No. 6 Syracuse on Saturday afternoon, but the Orange got the game-winner 62 seconds into the extra period for an 8-7 win at Homewood Field.

The loss was the third in a row for the No. 14 Blue Jays (4-3), who rallied from a 5-2 hole to a 7-6 lead with just under six minutes remaining. But Syracuse (5-1) pulled even on Nick Mariano's goal with 33 seconds remaining, then won when Brendan Bomberry scored off a feed from Sergio Salcido while cutting to the goal. Bomberry stuck it top shelf to end the 56th all-time meeting between the two winningest programs in the sport's history. Thirteen of the past 28 meetings between the two schools, including Saturday's contest, have been decided by one goal.

Hopkins trailed 3-2 at halftime and looked to be in trouble after surrendering the first two goals after halftime. But JHU rallied with a 5-1 run that included two goals by Robert Kuhn and one apiece from Wilkins Dismuke, Kyle Marr, and Alex Concannon. Kuhn's strike with 5:58 to play gave Hopkins its first lead since early in the first quarter. Complete box score

The Blue Jays nearly pushed their edge to two goals late in the game, but an apparent score was wiped out when Joel Tinney was ruled to have been in the crease, setting the stage for the Orange's come-from-behind win.

Goalkeeper Gerald Logan had 10 saves for Hopkins, which hosts 13th-ranked Virginia on Saturday at 1 p.m.