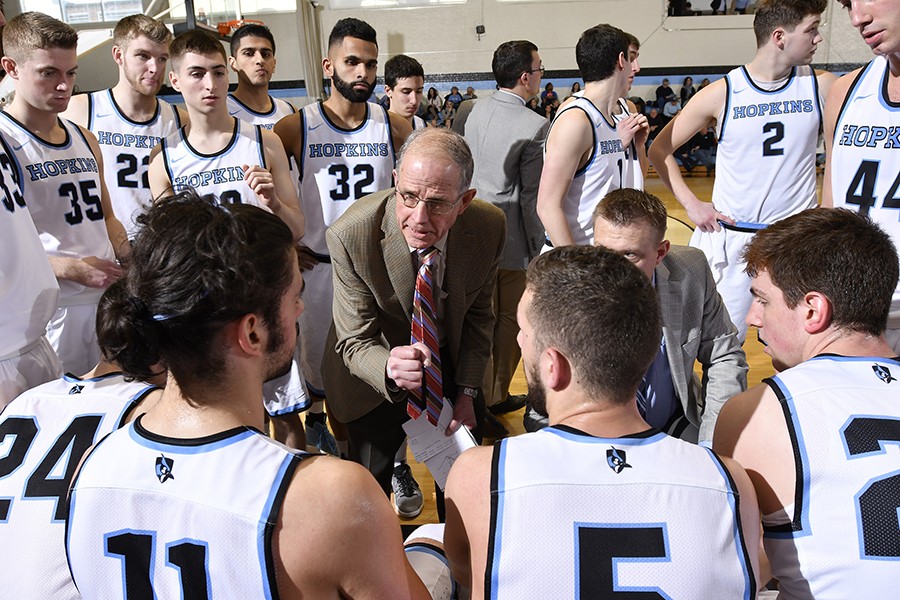 Bill Nelson, longtime head coach of the Johns Hopkins men's basketball team, announced today that he will retire in June after 31 years with the Blue Jays.

Since coming to Hopkins in 1986, Nelson has led JHU to 501 victories, 25 winning seasons, three Centennial Conference Championships, and 10 NCAA Division III tournament appearances. He is the winningest coach in the program's history and ranks 17th in wins among DIII coaches.

"As I've often said, I have lived my dream and much more. Coaching at the college level ... has been a dream come true."
Bill Nelson
JHU men's basketball coach

"With mixed emotions, I have decided to retire as the head men's basketball coach at Johns Hopkins University," Nelson said. "My wife, Margaret, and our daughters, Laura and Katie, have called Hopkins our second home for the last 31 years. As I've often said, I have lived my dream and much more. Coaching at the college level ... has been a dream come true."

In his fourth season, in 1989, Nelson—the 15th coach in program's history—guided the Blue Jays to their first-ever 20-win season and just their second NCAA tournament appearance. It was the first of five straight NCAA trips for Hopkins.

He became the all-time leader in wins on Nov. 23, 1991—just two games into his sixth season.

In 31 seasons at Hopkins, he coached 71 all-conference selections, three Centennial Conference Players of the Year, two All-Americans, and one Jostens Trophy winner. Eight of his former players have been inducted into the Johns Hopkins Athletic Hall of Fame, and Nelson joined that prestigious group in 2015. He has twice been named the Centennial Conference and NABC Mid-Atlantic Coach of the Year.

"To be easily the most identifiable person in a program that is nearly 100 years old says as much about the person that is Bill Nelson as it does about the success he enjoyed as our head men's basketball coach," said Alanna Shanahan, Johns Hopkins director of athletics. "Yes, he built a program that produced victories and championships, but he also built a family of Blue Jay basketball players who continue to be a vibrant part of the program and university long after they've graduated. We have been fortunate to have Bill Nelson as our men's basketball coach and we are truly thankful to him for a career of service to Johns Hopkins University."

A 1965 graduate of the State University of New York at Brockport, Nelson went on to earn his master's degree from the University of Oregon. He began his coaching career at the Rochester Institute of Technology, where he spent 12 seasons as an assistant before taking over as head coach in 1980. After 15 years with the Tigers, Nelson moved to Nazareth, where he spent three years as the head coach. At Nazareth, he coached Jeff Van Gundy, who went on to coach the NBA's New York Knicks and Houston Rockets and is currently a broadcaster at ESPN.

"I've had the opportunity to coach some amazing young men who not only made a name for themselves on the court, but also have been extremely successful upon graduation in a number of different fields, including the coaching profession," Nelson said. "My hope was always that our players would have a valuable and positive four-year experience at Hopkins, not only on the hardwood but also in the classroom and socially. I think we have succeeded."