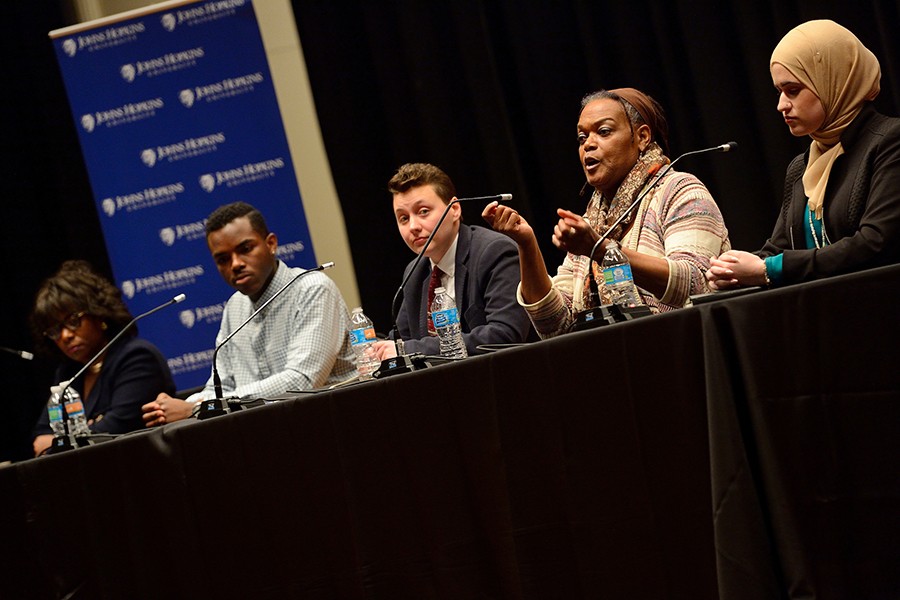 Students, faculty, and staff gathered in Johns Hopkins University's Shriver Hall on Tuesday night to talk race, intersectionality, and millennial social activism in the third installment of the JHU Forums on Race in America series for the 2016-17 academic year.

Four panelists, varying in identity, shared their similar experiences with discrimination, classism, and fighting for what they believe is right.

"The reality is that American Muslims have dealt with Islamophobia since day one, whether they are immigrants, or whether they were here … from the start of this nation."
Laila Alawa
CEO, The Tempest

Speakers included Payton Head, recent graduate of the University of Missouri, where he represented 28,000 students as president of the student government association; Mo Speller, a JHU doctoral student whose work explores the development of post-war housing codes; Monica Yorkman, co-founder of the Baltimore Transgender Alliance; and Laila Alawa, founder and CEO of The Tempest, a technology and media company aimed at building, amplifying, and connecting innovative products and experiences for diverse women.

Norma Day-Vines, a professor in JHU's School of Education, moderated the discussion. She asked the panelists what inspired their involvement in social activism.

"I was just trying to figure out how to survive," said Head, who "rocked the boat" when he ran for student body president while attending Mizzou. "I felt like I didn't fit in. … I was too gay for the black kids, or too black for the gay kids."

The struggle to find a place for himself at the university led Head to want to help others.

"I saw so many… different units of student identities being sectioned off," he said.

This theme of intersectionality—the interconnected nature of social categorizations such as race, class, and gender—carried throughout the event.

For Alawa, the inspiration to encourage change came from being a Muslim woman. She said her hijab, or headscarf, became a part of her identity and a part of her feminism.

But, she said, many onlookers have not always agreed or understood.

"As someone who has been followed by boys on bikes as I'm trying to go to the library, shot at by BB guns," Alawa said, "the reality is that American Muslims have dealt with Islamophobia since day one, whether they are immigrants, or whether they were here … from the start of this nation." 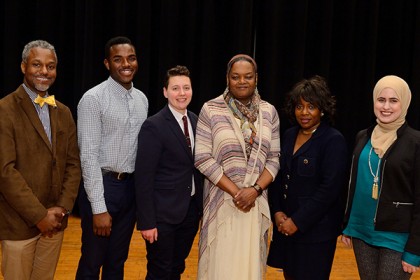 She described her experiences as "being visibly other," which led to Alawa's understanding that she could make a difference in the world. In March 2016, Alawa started The Tempest because she believes that telling stories can create change.

Speller's experiences as transgender and a person who "has faced physical threats because of [his] gender expression," inspired work on bathrooms at the university.

"Sites like bathrooms can be very anxiety-provoking for me," Speller said. "I started thinking about other types of people that are excluded on campus implicitly by the bathroom access we have available."

Speller has worked with parents in need of lactation stations, single stalls for an opposite gender child, and improving basic Americans with Disabilities Act compliance in many buildings on campus.

Each panelist used his or her personal experiences to leverage change for other marginalized groups.

Yorkman, a black, transgender advocate, said it is unjust that people are treated differently, bullied, or killed because of who they are.

"I was just brought up with a sense of right and wrong, and it had to do with treating people equally. And, combining that with a way of me never being able to keep my mouth shut," Yorkman said. "So those two go hand-in-hand, and equal to what they call activism." 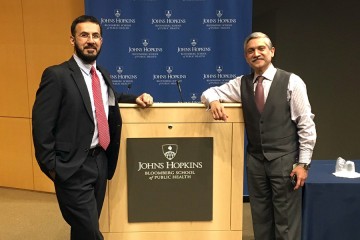