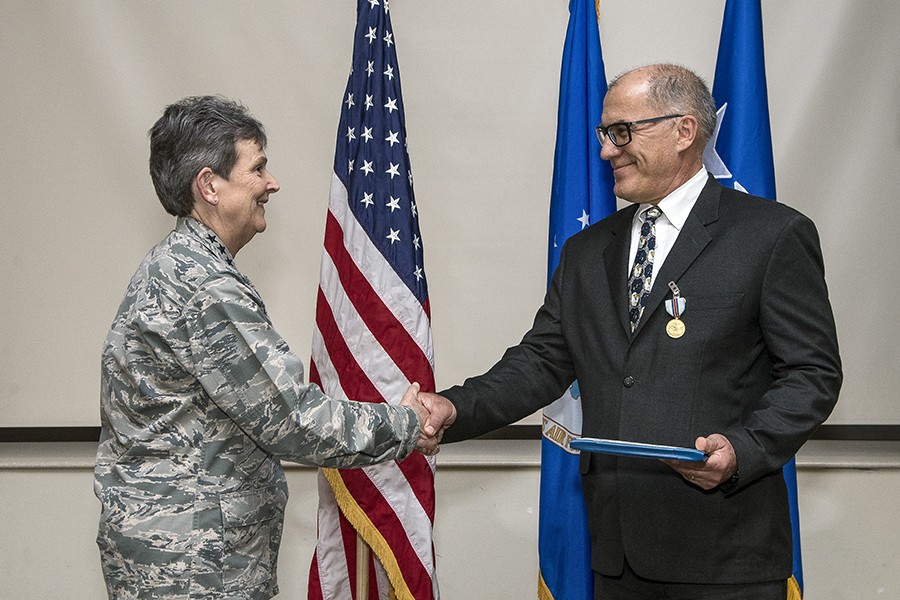 Calling him an "American hero," the U.S. Air Force presented alum Greg Gangnuss with a valor award on Wednesday for his remarkable actions in a harrowing and deadly situation in Afghanistan in 2015. 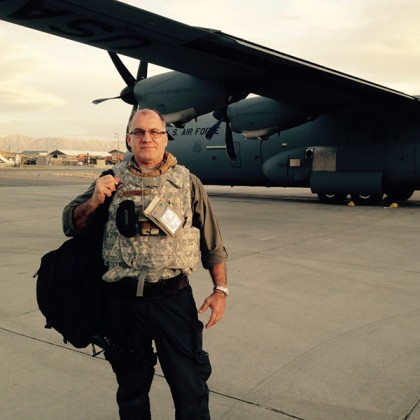 Image caption: Greg Gangnuss on an airfield in Afghanistan during his March 2015-April 2016 deployment

Gangnuss, who received a master's degree in environmental sciences in 1998 from Johns Hopkins' Advanced Academic Programs, is a civilian member of the Air Force Civil Engineer Center. On Oct. 11, 2015, he was on a voluntary deployment to Afghanistan as a senior environmental advisor for the Ministry of Defense Advisor Program when a helicopter carrying nine coalition members crashed while landing at the NATO Resolute Support Mission headquarters in Kabul.

Gangnuss ran from his office right into the smoking crash and began pulling people out from the wreckage, the Air Force reports.

"When we first opened the door, all we could see were boots sticking out," Gangnuss said. "The medic was taking toe pulses as we worked to free them. When we pulled her out, I saw she was an American colonel and I thought, 'This is one of ours.'"

Rescue efforts continued as darkness fell. [Army Maj. Reuben ] Trant held a portable light so Gangnuss and others could see within the cabin.

Ninety-eight minutes after impact, Gangnuss emerged from the wreckage with the final casualty. Soaked in fuel, sweat and blood, Trant and Gangnuss walked back to their building where they cleaned up. They didn't find out how many people had lived or died until several days later.

Burkel, one of the four survivors, has no memory of the crash.

On Wednesday, the Air Force recognized Gangnuss' heroism by presenting him with the Air Force Civilian Award for Valor. The award is reserved for heroism and courage exhibited by individuals who voluntarily risk personal safety beyond the call of duty.