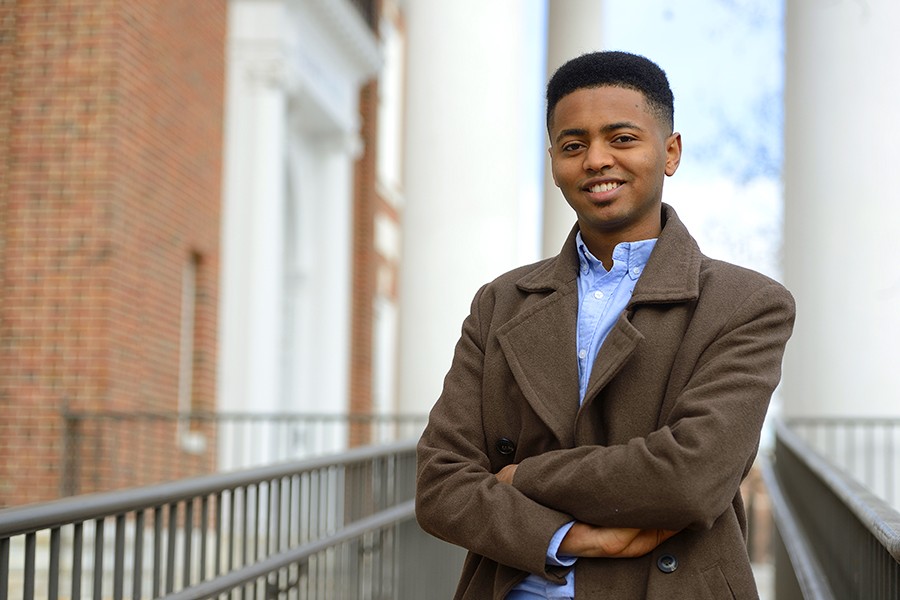 Next, he'll add Asia to the list. Arega was selected this month as a Luce Scholar, winning the opportunity to live and work in an Asian city for a year.

The program, launched in 1974 by the Henry Luce Foundation, identifies potential future U.S. leaders to promote cross-cultural understanding between the two regions. Arega, a pre-med student at Johns Hopkins majoring in neuroscience and molecular and cellular biology, is one of 18 U.S. scholars to land the coveted fellowship.

Though his placement isn't yet final, he expects to head to Thailand after he graduates in May, working on HIV/AIDS treatment in a research or hospital setting.

In high school, Arega taught himself English by watching TV and YouTube videos, and by conscientiously studying the Oxford Dictionary. Later, when choosing where to study abroad, he picked the University of Oxford, thinking, "I'll go to the place it's named after."

He's never traveled to that part of the world and doesn't speak the language—the fellowship is designed specifically for scholars with limited exposure to Asia—but he's not intimidated.

"I expect it to be familiar," Arega says of the potential culture shock.

After all, he's already been through that kind of change—at 14, he moved with his family from Addis Ababa, Ethiopia, to Portland, Oregon. He started his freshman year of high school a month late and only knew the bare basics of English.

But he adapted swiftly, four years later graduating as valedictorian from De Salle North Catholic High School with a full scholarship to Johns Hopkins as a Gates Millenium Scholar.

In high school, Arega taught himself English by watching TV and YouTube videos, and by conscientiously studying the Oxford Dictionary. Later, when choosing where to study abroad, he picked the University of Oxford for that reason, thinking, "I'll go to the place it's named after."

His choice of Johns Hopkins was also based on a teenage inspiration. In 2012, Arega saw a news story about Emmanuel Ohuabunwa, a Nigerian who immigrated to the U.S. and attended Johns Hopkins before earning a medical school scholarship at Yale.

"We had a lot of similarities," Arega says. "He excelled at Hopkins and I thought it would do the same for me."

Arega got a chance to meet in person with Ohuabunwa last year. And like Ohuabunwa, he plans to attend medical school, after his year as a Luce Scholar.

Medicine is a field that's in his blood—his father is now a registered nurse, his mother a certified nursing assistant, and his three younger siblings are all pursuing medical interests in some capacity. The family is now based in Seattle.

At Johns Hopkins, Arega has worked as a research assistant at the School of Medicine, in the Endocrinology and Metabolism Labs, and as a teaching assistant for chemistry and neuroscience courses.

Outside of his research, Arega has taken on various mentoring and tutoring roles in the community, including with the Jail Tutorial Project. He's also made a point of reconnecting with his Ethiopian roots, helping lead the Hopkins Ethiopian and Eritrean Society. Through that organization he arranged two separate trips to the Ethiopian city of Bishoftu, delivering excess medical supplies from Johns Hopkins to a hospital there.

Arega also set himself up with a mentor at that hospital, a general surgeon.

"I pretended to be a patient," he says—and once he had the doctor's attention, he got out his résumé and arranged for volunteer time.

In the future, Arega sees himself specializing in infectious diseases, ideally working in an HIV/AIDS program with UNAIDS or an international NGO. For this reason, Thailand stands out as a good fit for his Luce Scholarship, he says, for its "successful models for HIV prevention."

The fellowship program provides stipends, language training, and professional placement to scholars in a variety of fields who are nominated by their universities.

The annual cohorts are also known for fostering lifelong connections, which is another aspect that attracted Arega. The past Luce Scholars he's spoken to have emphasized those friendships.

"They really say it's a core part of the experience," he says.

For more information about the Luce Scholars Program, visit http://studentaffairs.jhu.edu/fellowships/