A woman's risk of dying of cervical cancer is higher than long believed, particularly among older and black women, new research led by the Johns Hopkins Bloomberg School of Public Health suggests.

"This is a preventable disease, and women should not be getting it, let alone dying from it."
Anne Rositch, JHU researcher

The researchers found that black women in the United States are dying from cervical cancer at a rate 77 percent higher than previously thought, while white women are dying at a rate 47 percent higher. The new figures reflect a change in how mortality rates are calculated. By excluding women who have had hysterectomies, which typically involves the removal of the cervix and therefore reduces the risk of developing cervical cancer to zero, the researchers say these data paint a more accurate picture of who is getting cervical cancer—and can be used to better understand how to prevent it.

Meanwhile, many of those who are dying are over the age of 65, a cutoff point where guidelines no longer recommend women with cervixes be regularly screened for cervical cancer. With routine screening, cervical cancer is preventable. In the United States, there are 12,000 cases of cervical cancer each year and around 4,000 deaths.

The findings, published Monday in the journal Cancer, highlight the need to understand the risks associated with cervical cancer in older and black women and determine both the best screening and treatment options for these women.

"This is a preventable disease, and women should not be getting it, let alone dying from it," says study leader Anne F. Rositch, an assistant professor in the Department of Epidemiology at the Bloomberg School. "Since the goal of a screening program is to ultimately reduce mortality from cervical cancer, then you must have accurate estimates within the population targeted by those programs—adult women with a cervix. These findings motivate us to better understand why, despite the wide availability of screening and treatment, older and black women are still dying from cervical cancer at such high rates in the United States."

Excluding women with a history of a hysterectomy, something that has not been done in previous calculations, makes a sizable difference since one in five women in the United States have had a hysterectomy, with the number slightly higher in black women than white women. Current guidelines do not recommend cervical cancer screening after the age of 65, since it was believed that older women were at much less risk. These new findings suggest the risk remains—and even increases—in older women.

"These data tell us that as long as a woman retains her cervix," Rositch says, "it is important that she continue to obtain recommended screening for cervical cancer since the risk of death from the disease remains significant well into older age."

To produce these national mortality rates, the researchers analyzed cervical cancer mortality rates using national death certificate data from the National Center for Health Statistics and from the Surveillance, Epidemiology, and End Results national cancer registries and then removed the proportion of women who reported a hysterectomy, a number obtained from a national survey. 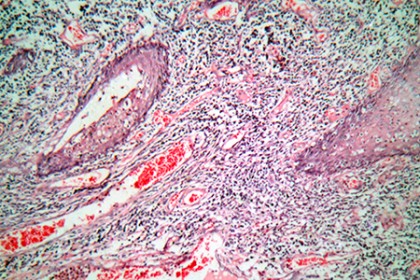 Black women are more likely to have hysterectomies, and at younger ages, compared to white women, largely because black women are more susceptible to fibroids—benign masses in the uterus—which can cause symptoms requiring surgery. Including all women in mortality rate calculations underestimated the racial disparity in death rates between black and white women by 44 percent.

Current screening guidelines call for routine Pap smears to test for cervical cancer among women between 21 and 65. If women have had three healthy tests over the previous decade, they are no longer recommended for testing after the age of 65. An inexpensive Pap smear can find changes in the cervix before cancer develops. It can also find cervical cancer early, when it is in its most curable stage. Cervical cancer, which is caused by the human papillomavirus, or HPV, can also be prevented by the HPV vaccine, which is offered to young people.

Rositch says it isn't clear why older and black women are dying of cervical cancer at higher rates. Were they not properly screened? Was there no follow-up after an abnormal screening test? Was something missed during screening? Was treatment ineffective? Answering these questions are critical to identifying the most appropriate interventions that would lower these mortality rates.

While rare in the United States, cervical cancer is more common in the developing world. Worldwide, more than 500,000 women are diagnosed each year and more than 200,000 die. GLOBOCAN, an arm of the World Health Organization, estimated in 2012 that 9.8 women per 100,000 die of cervical cancer in less-developed nations, including all of Africa, Asia (excluding Japan), Latin America and the Caribbean.

"While trends over time show that the racial disparities gap has been closing somewhat, these data emphasize that it should remain a priority area," Rositch says. "Black women are dying of cervical cancer at twice the rate as white women in the United States and we need to put in place measures to reverse the trend."