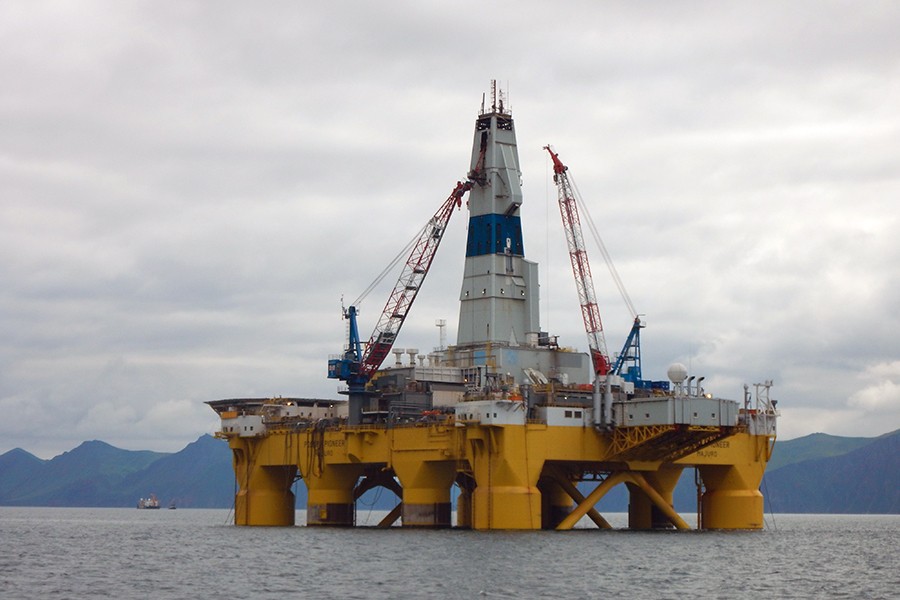 Image caption: An oil drill in the Chukchi Sea off the coast of Alaska

Last month, President Barack Obama designated the majority of U.S.-owned waters in the Arctic Ocean and the coastal deep-water canyons from Massachusetts down to Virginia indefinitely off limits to future oil and gas leasing. The White House announced the actions in conjunction with the government of Canada, which also placed a moratorium on new oil and gas leasing in its Arctic waters.

The move effectively placed a ban on new drilling off the coast of Alaska—up to roughly 12 nautical miles—in the Chukchi and Beaufort Seas, an area that Obama called "a sensitive and unique ecosystem that is unlike any other region on earth." In addition to environmental concerns, Obama cited the importance of this area to native Alaskans as rationale for the decision.

As written, the executive action does not appear to affect existing leases, and there's already been exploratory drilling in the area. But the order, made possible by the use of a provision in a 1953 law to ban offshore leases in the waters permanently, places Obama at odds with President-elect Donald Trump's promise to exploit the nation's untapped energy reserves.

For more insight, the Hub reached out to Charles Doran, a professor of international relations and director of Canadian studies at the Johns Hopkins School of Advanced International Studies. Doran, an expert on energy and security issues, was appointed last year to the Independent Task Force on U.S. Strategy in the Arctic of the Council on Foreign Relations. The task force was charged with creating a report to address all aspects of U.S. Arctic policy, including sovereignty and security considerations; interactions with other Arctic states and world powers; energy policy and environmental protection; and the concerns of native peoples facing unprecedented global warming.

Doran, whose views and opinions below represent his own and not those of the task force, agrees with other experts who claim that these recent legal moves set up a likely showdown with the incoming administration.

How surprised were you by the actions the U.S. and Canada took on mineral leasing in the Arctic?

I wasn't too surprised, but I had no inside information this was about to happen. If you think about it, a similar tactic [by the Obama administration] prohibited the further development of the Keystone pipeline.

From a U.S. perspective, how significant a segment of water will be impacted by this ban?

Basically, all the waters immediately offshore of Alaska. But, obviously, relatively speaking, this is far less of an area impacted than Canadian-owned waters. And far less than what Russia claims, which are not affected by these actions. Even with this measure, the bulk of the Arctic will still be open for drilling. Norway, Denmark, and Russia share the same kind of intense desire for drilling here.

What can you tell us about the Arctic waters' current use in terms of drilling, fishing, shipping and/or tourism?

First, keep in mind that the area of concern for the United States is ice most of the year, but melting is taking place at an accelerated rate, as there is twice as much heating of the atmosphere there relative to other places in the world. And the huge amounts of methane being released by the ice melting increases the heating rate even more. What does this mean? In the coming decade and a half, more of these waters will be sufficiently accessible enough so that drilling can take place.

To answer your question more directly, these are fragile areas that are currently used by the native people for fishing species such as Pacific cod, salmon, halibut, and others—and hunting, such as for minke whale. Currently, there is a commercial fishing ban in place by the Arctic Council member states (Canada, Denmark, Finland, Iceland, Norway, Russia, Sweden, and the United States), a treaty arrangement where these nations have committed not to harvest Arctic fishing stocks until they could get a better assessment of what the impact could be. Keep in mind, the three biggest fishing nations are China, Taiwan, and Japan, and they are not members of this agreement, so who knows what will happen when these waters open up.

Shell announced in September 2015 it would immediately cease offshore drilling in the Arctic, citing low oil prices and uncertainty in regards to the federal regulatory environment. What is your sense of why Shell pulled out, and why others are not currently drilling in these waters?

The permit process for offshore drilling is very elaborate and expensive, and there are lots of delays. Plus, the price of oil right now is too low. So drilling in these waters is very costly and would not be cost effective. Until there is a sense of upward pricing, I doubt there will be very much drilling here. With that said, once there is a major strike, I think this will create a sense of urgency among the industry and they'll feel they must get a permit and get out there. There will be a gold rush, of sorts, once the first significant deposit is found and tapped.

What are the environmental implications of such a gold rush, or any sort of drilling in this area?

If the drilling were done carefully, with proper equipment and safeguards, the risks would probably be bearable for drilling and commercial development. But keep in mind, in this same ruling, the Obama administration prohibited drilling from Virginia up to the coast off of Maine. Similar restrictions were put in place related to how fragile the area is. The U.S.-owned Arctic waters are indeed a highly-fragile environment. And the one big difference in these two impacted areas is climate. The Arctic is very cold, and because of that any damage caused by a major leak will be lasting, and very difficult to clean up. It would just be a slower process. And any oil not immediately cleaned up would break down very slowly.

Do experts have any sense of how much oil and gas there is in Arctic waters?

There have been statements by the geologic community that 20 percent of the world's oil stock could lay in the Arctic. But if so, what percent of that lies in the immediate area offshore to Alaska and Canada? That number could be considerably smaller.

What is your sense of what Alaskans want in terms of this area's use?

There are various players here. Alaskans, by and large, would like to see drilling, as they want the revenue this would generate. Currently, revenues are in decline. The [Trans-Alaska] Pipeline System to the Valdez [Marine Terminal] is partially full. They will need new sources of oil and natural gas. But there are other considerations—drilling ought not take place in areas adjacent to communities of native people.

How difficult will it be for future presidents to overturn Obama's decision should they seek to do so?

This is a bit out of my depth, as I can't claim to be an expert on U.S. Constitutional Law applied to this ruling. But I think this would require legislation that might be hard to pass regarding future oil drilling. Right now, it's a game between two administrations: one that is opposed to drilling and one that seems open to it. But then again, if you have [Rex W. Tillerson], the former president of the largest international oil company, ExxonMobil, poised to become secretary of state, and other members of the incoming president's cabinet supportive of oil drilling, and mix in a Republican-controlled Congress, I would think they would find ways around this ruling.

What is at stake here? There is a limit on drilling in the immediate sense. What comes next will be a game of tactics. The Obama administration all along has wanted to emphasize non-fossil fuel development and infrastructure. The next administration appears far more supportive of fossil fuel development. This will all play out in the years to come.​