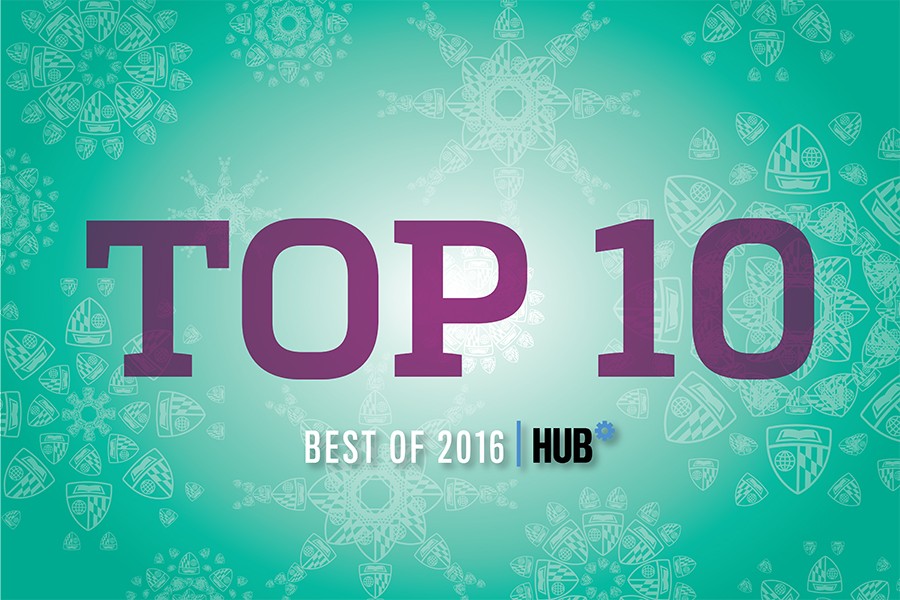 As 2016 draws to a close, we at the Hub wanted to take a look back at the year's most popular articles—discoveries that shook the scientific world (and Reddit), medical marvels transforming health care, and news about Johns Hopkins and its distinguished faculty and impressive students, and more.

Check out the list below and see what made waves this year.

On July 1, Redonda Miller succeeded Ronald R. Peterson as president of The Johns Hopkins Hospital, becoming the first woman to hold the post since the hospital was founded in 1889. Miller first came to Johns Hopkins as a medical student and completed her internship and residency here.

In February, the School of Public Health announced that they had developed three dimensional mini-brains—barely visible to the human eye—which grow and form brain-like structures on their own. The development of these cell clusters could dramatically change brain research and drug testing, scientists speculated, and have the potential for replacing hundreds of thousands of animals used now in neurology labs.

Alfredo Quiñones-Hinojosa came to the United States in 1987 from Mexico at the age of 19, penniless and unable to speak English. He worked odd jobs and manual labor to afford his college tuition, and now he is an accomplished brain surgeon specializing in cancer and pituitary tumors. Brad Pitt's production company, Plan B, has teamed up with Disney to produce an inspirational film about his life.

7. Bernie Sanders to speak at Johns Hopkins on Nov. 17

The announcement of the U.S. senator's and former presidential candidate's visit spread rapidly through the Hopkins and Baltimore communities and beyond, and tickets to the talk sold out in minutes. Event coordinators set up three overflow rooms and a closed circuit live stream in order to accommodate the crowd. During the talk, which came less than two weeks after the presidential election, Sanders encouraged students to stay involved, saying, "You want change? No one's going to give it to you."

Women who plan on becoming pregnant are told they need enough of the nutrient folate to ensure proper neurodevelopment of their babies, but research from the Johns Hopkins Bloomberg School of Public Health suggests there could be serious risks in having too much of the same nutrient. More research is needed, the scientists say, in order to determine just how much folic acid a woman should consume during pregnancy.

5. How Donald Trump won the election, and what the 'experts' missed

The morning after Donald Trump's election victory, Johns Hopkins political scientist Adam Sheingate spoke with the Hub about what polling experts missed and what the next president's term might look like, saying "Democracy is fragile; handle with care."

The new class, which arrived on campus in August, not only breaks university records academically, but is also the most diverse to date. The students hail from 49 states plus Washington, D.C., and 54 countries.

2. Johns Hopkins study suggests medical errors are third-leading cause of death in U.S.

Patient safety experts at the School of Medicine calculated that more than 250,000 deaths per year in the U.S. are due to medical error, making it the third-leading cause of death for Americans. The experts say that these errors are not necessarily caused by bad doctors—possible errors include systemic problems like poorly coordinated care, fragmented insurance networks, and the absence or underuse of safety nets.

The top story of 2016 got a readership boost from the popular website Reddit, where more than 23,000 users upvoted the Hub's article. Astrophysicists in the Krieger School examined gravitational data of two black holes and determined that their masses fit predictions of so-called primordial black holes, or black holes formed at the creation of the universe. If they are primordial black holes, scientists say that could make them good candidates for dark matter.

Of course, there were plenty of other significant stories among the more than 1,000 articles post to the Hub during this calendar year. Some honorable mentions that didn't crack the top 10: